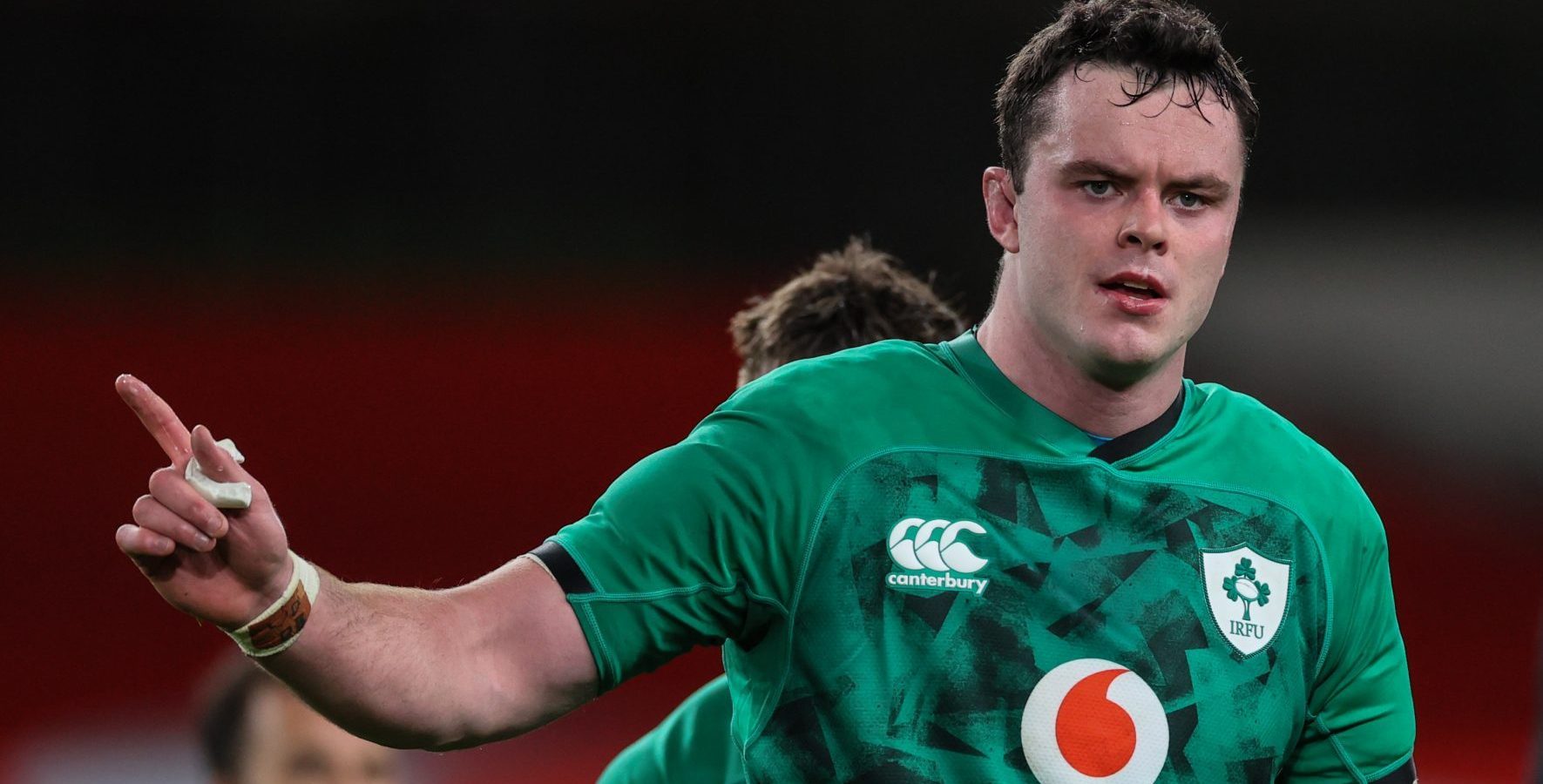 While the country succumbed to another lockdown period, rugby provided a much needed outlet throughout the month. It came thick and fast in the form of PRO14 action and the newly devised Autumn Nations Cup.

There was plenty of action off the field too. 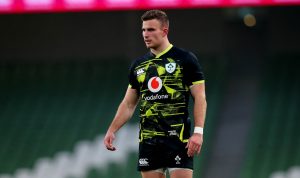 Even with several postponements, owing to the amount of games scheduled for our men’s sides in November there was always going to be plenty of opportunity for players.

While it was a mixed month for Ireland, James Lowe, Billy Burns and Shane Daly followed hot on the heels of Ed Byrne, Will Connors, Jamison Gibson-Park, Hugo Keenan in making their international bows while Ulster’s Eric O’Sullivan was also called into the squad as injury cover in recent weeks. The month was also notable for James Ryan being handed the captaincy for the first time in the absence of Johnny Sexton.

Meanwhile, there were several debuts handed out in the PRO14. At Ulster, Aaron Sexton enjoyed a try-scoring debut away to Edinburgh while Ethan McIlroy also marked his first start for the province with a try against Zebre. Munster’s Sean French scored against the same side on his first appearance for Munster. French’s academy teammates Thomas Ahern and Jack Daly were also handed debuts for the famous Red Army in November. Unfortunately, following a promising start to the season, John Hodnett has been ruled out for several months through injury. Hodnett will be joined in his recovery by RG Snyman who is settling into life in Ireland despite an ACL injury.

In Connacht, former Garbally College peers Conor Kenny and Colm Reilly were handed their first starts for the province while there were further milestones with Ultan Dillane earning his 100th cap and Sean O’Brien returning to action with a try following a long-term injury.

At Leinster, there was some terrific news as David Hawkshaw finally made his senior debut against Glasgow while Michael Milne made his first start for the province on the night Ross Molony became the latest centurion for the club against the Ospreys. Hawkshaw’s rehab partner Dan Leavy also stepped up his return to full fitness with a Player of the Match display against Edinburgh.

Sadly, it was a frustrating month for the Irish Women’s squad following the cancellation of their outstanding Six Nations tie against France in addition to the postponement of  the European qualification tournament. We spoke to Player of the Year Cliodhna Moloney who remained upbeat despite the news. Remarkably, her teammate Lindsay Peat will be 40 heading in the next campaign. Happy birthday Lindsay!

You can check out our interview with Cliodhna here. 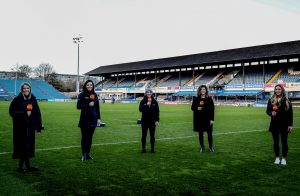 As Leinster Rugby faced Cardiff Blues at the RDS, TG4 broke new ground with an all-female broadcasting team that featured Eimear Considine, Deirbhile Nic a Bhaird and Jenny Murphy. It was the first time in the history of Irish sports broadcasting that a game was fully voiced and analysed by a female panel.

Writing for the Guinness PRO14, Eimear explains the importance of female visibility in sport.

While many rugby players would love to be able to work in rugby for the rest of their lives, whether it’s on the screen or not, most understand that they will have to look elsewhere for opportunities. Following the release of his new book ‘When the World Stops Watching,’ RTÉ journalist Damian Lawlor led discussions with our provincial squads about the transition from elite sport. Lawlor was joined by former players Eoin Griffin, Shane Jennings, Jonny Holland, Marcus Horan and Paul Marshall while former Galway hurler and current wellbeing coach Tony Óg Regan also contributed. 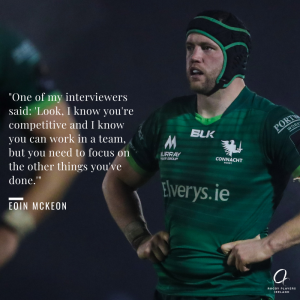 Having officially announced his retirement in October, we caught up with Eoin McKeon who provided us with an insight into the challenges he faced in securing a new position. Check out the interview here. 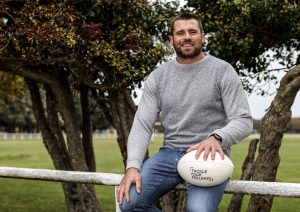 In early November, CJ Stander become our latest ambassador for the Tackle Your Feelings campaign. CJ was on hand to help us launch TYF Pro, an add-on to the original TYF app, which has been developed specifically for members of Rugby Players Ireland.

Through TYF Pro, Players will be able to access sections that cover resources unique to the rugby playing environment: injury, transition and managing life in a high-performance arena are included as well as the existing TYF resources to help maintain their positive mental wellbeing. TYF Pro also aims to support the Player Development Programme by pooling a multitude of resources in one easily accessible place and provides information on contacting both internal (to RPI) and external resources for additional advice and information.

While highlighting the app, CJ also used the opportunity to speak about his experience when first arriving in Ireland and the welcoming nature of Irish people. In sharing his story CJ encouraged us all to rally around each other as lockdown took hold for several more weeks. Check out CJ’s ambassador video here! 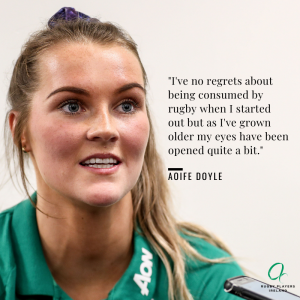 Earlier this year, Goodbody announced the continuation of its relationship with Rugby Players Ireland in aiding the development and progression of players’ off-field careers. Amongst the eight recipients for the 2020/21 academic year were Irish international and student teacher Aoife Doyle, and Munster Rugby hooker Rhys Marshall who continues his Agricultural Commerce studies through Massey University in New Zealand.

You can read our interview with Aoife here.

We also speak to Rhys here.

Meanwhile, former Bursary recipient Ciara Cooney has graduated with a MSc by Research from GMIT. Her research focused on Clinical Validation of METS, an Evidence Based Metabolic Health Platform for the Clinical Management of Obesity and Associated Metabolic Disorders in Ageing Adults. Congratulations, Ciara! 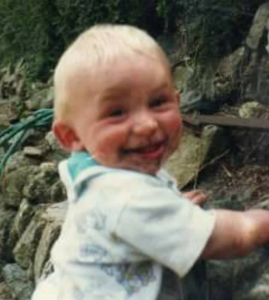 On Friday November 20, Rugby Players Ireland joined forces with the Irish Youth Foundation for the #Generation Pandemic campaign. The initiative, which seeks to put a spotlight on Ireland’s biggest ever crisis for the country’s most vulnerable children and young people. In light of the Covid-19 pandemic young people have been more negatively affected than any other group; are less resilient to recover; are harder to reach with solutions and are more likely to spiral downwards into further isolation, behavioural problems, mental ill-health and danger.

Almost 100 rugby players from across the country joined other sportspeople and personalities in sharing their childhood photos on social media in an effort to raise awareness of the campaign and prompt funding for the Irish Youth Foundation. 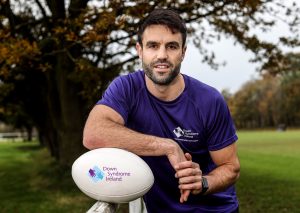 Rugby Players Ireland were delighted to facilitate a relationship between Down Syndrome Ireland and Conor Murray. Having landed in from Paris, the organisation’s new ambassador launched the DSI’s 21 Day Challenge in an effort to get Irish people up and moving during the November lockdown.

Many of our players also took the opportunity to get their tache on and raise awareness for men’s health issues with Movember.

Amongst the many highlights of our players based abroad, it was nice to see former Connacht duo Niyi Adeolokun and Peter McCabe extend their respective stays at the Bristol Bears for the 2020/21 campaign. Both joined the club prior to its European Challenge Cup success in October.

Congratulations also to brothers Harry and Sean McNulty who has signed on with new Major League Rugby side LA Giltinis. In moving Stateside, Harry formally brings his time with the Irish 7s to an end while Sean joins following stints with the New England Free Jacks and Rugby United New York.

Rugby World magazine carried an interesting piece with Sean’s former Free Jacks teammate Tadhg Leader who is trying to crack the NFL as a kicker!

Angus Kernohan (Ealing Trailfinders) and Jack Stafford (Harlequins) were also amongst those to make their debuts for new clubs last month.

Meanwhile, Conán O’Donnell continues to live it up in New Zealand where he recently togged out alongside All Black legend Kieran Read for Counties Manukau. 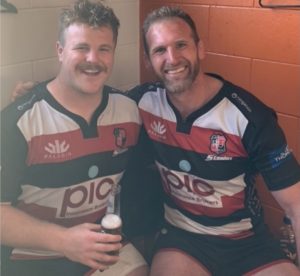