Less than half an hour had passed following Ireland’s World Cup quarter-final defeat to NEw Zealand before Mike Ross took to Twitter.

No kneejerk emotional reaction to the heavy defeat, no criticism of Joe Schmidt and no personal attacks on the players — instead, he felt a need to plead for the opposite.

“Over the next hours and days, spare a thought for the players,” he wrote. “As fans, we’ll get over it eventually, but for them it will linger for months…They’ll have worked insanely hard to get to this stage, and it’s soul crushing. For some, it’s their last cap in an Irish jersey. For others, it’s their last World Cup. The lucky ones have to wait four years.

“In 2015 after we lost to Argentina, it felt like mourning.

“I suppose what I’m getting at is be kind. They’ll be far harder on themselves than anyone else. Life will go on, and rugby will continue to thrill and disappoint us.”

Over the next hours and days, spare a thought for the players. As fans, we’ll get over it eventually, but for them it will linger for months. They’ll be the ones staring at the ceiling in the small hours, running through what went wrong.

Ross, the now retired Ireland and Leinster prop, played in two World Cups, with each ending at the same stage as this year’s vintage. 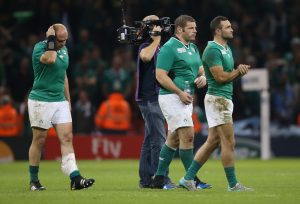 2015 was Ross’ last shot at a World Cup, and the loss to Argentina hung over him like a cloud for many months, even after his return to Leinster and the glittering Champions Cup fixtures that have distracted some of Ireland’s players in the past fortnight.

The World Cup consumes up to six months of a player’s life, and when the end continues to be such a cutting one, it can take experience of that feeling to know that the players need no more punishment piled on.

“For some of those guys it’ll be their only shot at it and for some — like [Rory] Besty, it’s their last cap… it felt like mourning in 2015 for me, because I knew that was probably my last shot at a World Cup, and to be honest I didn’t know if I’d get capped again.

“I think what rugby players have to deal with now that they didn’t have to, even in that recent past, is social media, and having social media is like someone else having your phone number — a direct line to you.

“If you’re on Instagram or Twitter, you kind of open yourself to things you didn’t have in the past.”

Richard McElwee, Rugby Players Ireland’s head of communications, admitted the squad “expected” some comments on social media during a World Cup, adding that some said it was “tough going” following the All Blacks defeat.

“A few of them…they tell you they don’t listen, but it’s hard when it’s so prevalent and you’re getting tagged into things,” he added.

Ross’ pleading to fans was to criticise if they wanted but to leave the players out of any direct correspondence.

“People have no compunction to slate you on Twitter, but they’d never do that if they met you in a public place,” he said.

“Twitter seems to be a place you go to have a fight. There’s a lot of really negative commentary, some really over the top criticism.

“I experienced it a small bit myself and I wouldn’t have a huge social presence, but people just reflexively send things out without thinking about it. I made a [prop] joke about Tadhg Furlong when he kicked a ball — I said ‘he’s dead to me’, and a lad called me “a talentless prick” …thinking I’m slagging off Tadhg. Because you’re the other side of the screen, people don’t really think. A good rule of thumb is if you wouldn’t say it to someone’s face, don’t type it.” 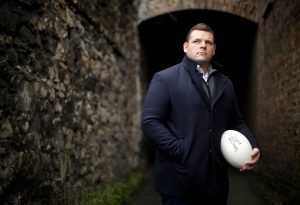 Ross sat down to discuss the Tackle Your Feelings app, relaunched by Rugby Players Ireland and Zurich Insurance, a mental well-being app that aims to promote a proactive attitude to mental health and provide people with the tools to take control in difficult situations.

Ross was just 17 when his younger brother Andrew (16) died by suicide in 1997, leaving the player with a heightened awareness of the importance of opening up and speaking out.

“The Tackle your Feelings campaign has been really good, it started in 2016 and a lot of guys and girls have come out and said ‘it’s ok to not be ok’,” he said.

“Just like if you get a sprain in your ankle, you go and get help, if you’re having mental difficulties you can go get help and be treated in the same way.

“It’s becoming a lot more acceptable for someone to come out and say ‘I’m struggling here, I’m having a tough time’, and realise there’s supports there.

“With my own family history, it probably would have been useful to have more conversations around this when I was younger. It was not really spoken about as much as it is today.

Rugby is becoming a more balanced sport with World Rugby’s focus on growing the woman’s game, but suicide is a problem that disproportionally affects males, with 80% of the 392 deaths in 2017.

“It was international men’s day on Wednesday, and men still make up a far higher proportion of suicides, of workplace deaths… we’re probably traditionally more likely to internalise things, and think it’s not manly to engage with these things,” Ross said.

“It’s often actually the most manly thing you can do.”

Some players thanked Ross for his posts, knowing they’ll be more disappointed than any distant observer, but the Cork man would still like to see more done by social media companies.

“I’d like to see an end to anonymous accounts, if you put your name and face to posts, that tends to moderate a lot. If you’re hiding behind anonymity you tend to say what you want.”