Tackling Smarter in the States

In a number of sports documentaries doing the rounds on Netflix, American Football holds the key to a better life. The self-worth of their subjects is tied to their sporting form and how they perform has a direct impact on how the rest of their lives go.

“It’s on a different level,” former Ulster back-rower Roger Wilson exclaims. “You see a bit of the NFL back home, but college football is where it’s at. Some of the high school stadiums are bigger than our provincial grounds!”

Naturally, the allure of the spectacle proved hard to ignore when Wilson moved 7,000km from his Belfast home to Dallas last year. Indeed, with a master’s in performance science from Setanta College and a 15-year professional rugby career in the back pocket, it seemed that once Wilson and his family landed Stateside, American Football was always going to feature.

“There’s a lot of crossover between rugby and American Football,” Wilson asserts, with a nod to Christian Wade’s attempted transition. “But the issue of concussion has drawn the sports closer in recent years. In my opinion, rugby has been more proactive on that front but that’s not to say it is being ignored in America.”

Owing to a relationship formed between the Waisele Serevi, the Fijian 7s legend and Pete Carroll, the Head Coach at the Seattle Seahawks, a new defensive system based on rugby tackling techniques was introduced by the NFL side in 2014. Leveraging the shoulder and taking the head out of the game ultimately underpinned the Seahawk’s route to the Super Bowl that season. 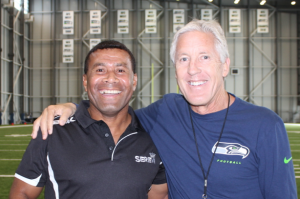 “I was aware of that story and followed developments closely,” Wilson says. “I could see that it picked up a lot of traction, especially in the schools and colleges and I began to identify an opportunity where my skillset could be used. Only, I was in a new city, a new country and I didn’t know anybody.”

Despite landing in unfamiliar surroundings, Wilson managed to secure an externship at a High-Performance facility run by Michael Johnson, the four-time Olympic gold medallist. There, he encountered many elite athletes, including unattached NFL players who were awaiting calls from their agents.

“They were fascinated by rugby,” Wilson begins “but they also think anyone who plays it is crazy!

“We’d get into the specifics of tackling and from a rugby perspective they had zero technique. As soon as they put their helmets on, they suddenly think they’re invincible and they run headfirst into their target. That was an eye opener.

“It was also clear that the parents I got to know were being distracted from the benefits of their kids playing sport because of the increased spotlight on the tackle area. They were keen for me to do something and so TackleSmart was born – created by a parent, for parents!” 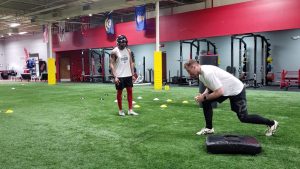 Wilson’s awakening was nicely timed. In a study carried out by the National Federation of State High School Associations last year, it emerged that since 2010, participation numbers in High School Football had fallen by 7%. This decline was keenly felt even in the state where the Friday night lights burn brightest – Texas.

In an effort to address flagging numbers nationwide, Serevi’s company ‘Atavus,’ which was initially set-up to promote the game of rugby in North America, was tasked with rolling out safe tackling programmes across the country. Texas was the first state to stipulate that every coach must be certified.

“It’s not that simple,” Wilson cautions. “There are a number of old-school coaches still on the circuit. Once they complete their training and get their piece of paper, they throw it in the bin and revert to what they know.

“I’ve found the same issues on a personal level,” he adds. “Obviously, I’ve never played American Football and so when I go to meet these people, with my accent in tow, it’s hard to establish much credibility. It’s quite a closed and cliquey community. It’s a bit of an obstacle.

“No matter how much I work with individual players, the reality is that they’ll only benefit if their school follows through on the teachings. The nature of the education system here means that many people are often priced out of going to University, but if you can get a scholarship it can change your life.

“American Football then becomes more than a pastime. The stakes are high and players need instant results. They only have a finite time to make it. Therefore, I need to be working with organisations that are bought into it and willing to change the culture on a wider level.

Building a business from scratch in a foreign land undoubtedly presents Wilson with many challenges. Having set up her own business over eight years ago, Wilson’s wife Nathalia has been able to provide some practical entrepreneurial advice, but the Ulsterman quickly realised that getting his name out there would be a crucial component.

“I’ve been flat out networking, trying to meet as many people as possible. Through those connections I began to run individual sessions for kids and that quickly developed into group workshops.

“Recently I’ve been working with high school coaches, while I’m also going to be working with another team, reviewing their game footage and analysing their tackling. I’m on the cusp of breaking into the high school game but I’ve to make the most of every opportunity, so it’s very busy at the moment!”

With two years of the ‘afterlife’ behind him and in the throes of an adventure with his young family on the other side of the world, you’d think Wilson would spare little thought for rugby in Belfast. Quite the opposite. 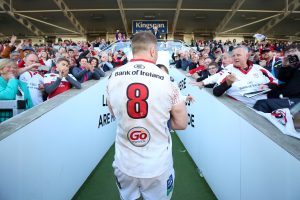 “I watch as many Ulster games as I possibly can on Mobdro. It’s nice to look in from afar and support the lads. Personally, the timing [of retirement] was right. I was happy to finish on my terms and I needed a new challenge.

“I really enjoyed my career, but it was my job for 15 years and that’s a long time. Towards the end it was becoming more of a chore in terms of keeping my body right. I was feeling beat up a lot and the enjoyment went out of it a little.

“So, I don’t really miss the game although I’ll always miss the camaraderie. That will never be replaced. I’ll be back at Christmas and I’ll throw something into the What’s App group and see if anyone is around.