“THE KEY WAS TO BE PART OF A WINNING CULTURE. AND THEN JUST LEAVE IT.” 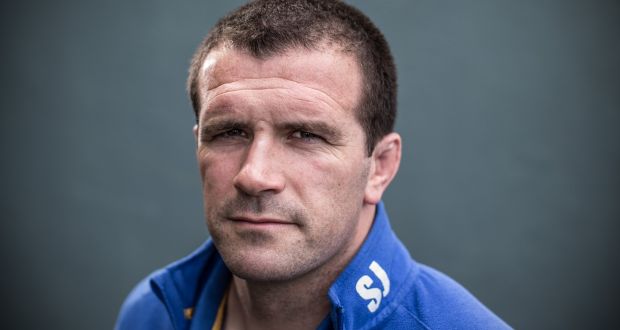 “Rugby players are very self-critical but we have to learn to be patient, to accept we are not good at what we do [after the game] and just try to get better.” Former Leinster and Ireland flanker and Executive Board Member of Rugby Players Ireland discusses his transition with Gavin Cummiskey of The Irish Times. You can find the original article here.

Most people assumed Shane Jennings would be a coach by now. It seemed an obvious route for the man who, along with Leo Cullen, ignited Leinster’s cultural revolution on the pair’s return from Leicester in 2007.

Life is so rarely black and white. Elite professional sport tends to be just that – clear-cut.

“I didn’t have the desire,” said Jennings in that matter-of-fact way of his.

“Eoin Reddan made a really good point when we were rooming together one night, and both studying away, nearing the end. He said ‘If you want to be a good coach you have to love doing it as much as you do being a player. Dedicate your life to it. Dedicate your free time, your family time.”

There is a masochistic element to being a coach. Suffering is guaranteed and self-inflicted, yet success is dictated by the performance of others. The inexplicable ability to motivate men and women is needed. The stress of it all. Unending days and nights managing and preparing in a constant cycle that lulls for a couple of weeks, at best, every year.

“The commitment is insane. As a professional rugby player you never enjoy the wins as much as you should but you suffer the losses. It’s ridiculous. You think the world is going to end.

“It’s not. It’s just sport. Professional sport but just sport. I just didn’t feel I wanted to do it. I was glad that I decided, ‘This isn’t for me.’”

Not at any level?

When the game ended, and he had the option to “kick the can down the road a bit longer,” Jennings opted to transition as far away from rugby as can be imagined.

The theory being that’s the best way to adjust to regular living.

“I think I will leave rugby behind,” agreed Tadhg Furlong at the One Zero conference this week. “I know I am only 24 but I think I will step outside it.”

Beside Furlong, Seanie O’Brien has the opposite mindset. Only 30, there are plans afoot down in Carlow, on the farm and other business ventures, but coaching is something he has done with Tullow since he was 19 and he wants to keep it going when his currently malfunctioning body splutters to a halt.

In between O’Brien’s public realisation that he will have to wear his Warren Gatland/Rob Howley comments forever, he was asked which player has had the most influence on his career.

“Someone I really admired was Shane Jennings. Probably didn’t tell him that often enough. Just his attention to detail, his work rate, all about the bigger picture, complete squad man.”

Jennings is a guinea pig now. Like the apostrophe gang – D’Arcy, O’Connell, O’Gara, O’Driscoll – the first fully professional Irish rugby players are learning to breathe outside the bubble. All the above have kept some link to the game – media, coaching or both –  with Jennings set to be part of TV3’s Six Nations coverage. 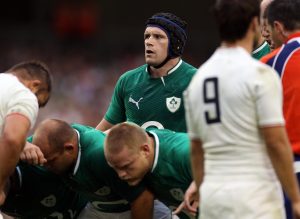 None of them have mentioned their joyous transition. In 10, 20 years this period should make for a fascinating, and hopefully not harrowing, study.

But the path Jennings now travels must be of enormous benefit to Josh van der Flier and Dan Leavy when their number gets called.

Ulster opt for experience for daunting trip to La Rochelle

These are the “genetic freaks” he spoke about seeing in his rear view mirror, who helped convince him to move on, and they are all on show in Scotstoun this lunch time.

Jack Conan seems to expand on every viewing (“a pretty unique individual as well, a specimen”), while van der Flier is inching towards the title of undisputed openside in Irish rugby. Unless the returning Leavy forcibly objects.

“Genuinely excellent players,” says the man who wore 7 over 200 times for Leinster yet only gathered 13 Ireland caps.

“I remember Josh, when I was leaving, was just hungry for knowledge. Reminded me of Rhys when Rhys came in . . . Dan is a very abrasive hard player, Jordi Murphy . . .”

“But you are judged on winning so they have to take ownership of it. Jamie [Heaslip] is the elder statesman there now but he’s coming back from injury so somebody needs to grab a hold of it. That’s where the likes of Rhys can . . .”

He would go on and on but it’s 1.47pm and he has another appointment at 2pm. You see, Jennings is just another 36-year-old on his lunch break in Sandyford Industrial estate. Adjusting.

If he knew then what he knows now would he have still gone down the professional rugby route?

“I totally agree – we are the guinea pigs. I was at a wedding at the weekend sitting beside Victor Costello. When I joined St Mary’s I was looking up to Victor, Mal [O’Kelly], Trevor [Brennan] who were the guinea pigs, having been amateurs who crossed over to the professional era but my generation are the people who came into a professional atmosphere. 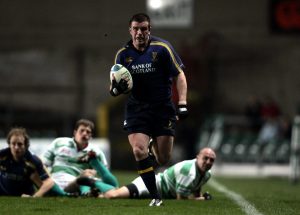 “What I know now? I definitely would have. I used to watch a lot of NFL and for the rookies they used to get in an ex-pro to tell them about transitioning out of the game. ‘I made a lot of mistakes, I didn’t talk to a tax advisor and I wasted all my money.’ One guy got up and it was all a bit theatrical but he said: ‘Don’t try and change it. You will never, ever recreate what I did in the NFL. It was so unique, so different to anything else, that I am never going to try and replace that.’ That resonated with me. The key thing was to be part of a winning culture. And then just leave it.”

The NFL rookie’s deal is incomparable to the best IRFU national contracts, that of Heaslip or Johnny Sexton. But there are a few zeros missing. The young American Football player can retire, and some do, after one deal and be financially set for life.

But the NFL’s non-contact rules at practice are worth highlighting. Donncha O’Callaghan told Newstalk he is seeing two concussions every week at Worcester – in training. He sounded scared. He said he felt blessed after each game he was not badly hurt in. How much damage are these men doing to each other that we don’t know about?

“I remember at Leicester some training was genuinely harder than games. They were a bit of a bully boy pack but there was a benefit of knocking lumps out of each other on a Tuesday, but there is also a benefit from getting the balance right. We are in a physical confrontational game so at times we have to do it, but it has to be married with intelligence and with an outcome in mind.

“There is a balance but concussion is scary. I remember towards the tail end of my career my whole attitude changed. I didn’t put the onus on others to make the decision for me,” said Jennings.

But hasn’t the game, since he walked away, become faster, with increased collisions, certainly more injuries, only going one way? “No! I don’t watch it as much as I’ve a young family, I still love watching it but . . . ”

The former player cannot be overly concerned by such matters. Jennings departed rugby armed with an impressive education, even a stint at Harvard. He went into the property game as a 30-something without one key component: experience. He moved into his current job, managing a franchise, Home Instead Senior Care, that organise homecare for elderly people. 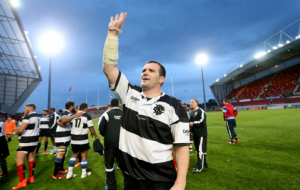 This, you may have gathered, is not a cautionary tale. Jennings has not had a smooth transition from rugby to the real world but that’s his point. It’s supposed to be difficult.

“When my current opportunity came I knew I would be out of my depth but I also knew if I did it I would gain experience.

“The biggest challenge I am finding is not that I miss the game but that the problems are no longer black and white; they are not up on a screen with constructive criticism showing you didn’t do something correctly.

“That doesn’t work in real life.”

Most people were not elite athletes. Most people can turn keeping their head above water into an art form, most of us bluff until we arrive at some form of acceptable end product and then – voilá! – we head for the hills.

This normal work force must drive ex-professional sports folk insane as it goes against every fibre in their high-achieving, sculptured bodies.

There is no way of preparing for that.

“No, experience is all. But there are 100 percent transferable skills.”

“Rugby players are resilient. You can take constructive criticism, you are built on that, you are very self aware – you are not completely unconscious of your incompetency.”

It’s pointed out that unconscious incompetency can prove hugely beneficial in the real world.

“Maybe. My point is you are not afraid to communicate with people to get help. My old boss said to me – 100 percent isn’t success some times. It could be 51 percent. It could be just doing something that you don’t feel is very good but you got it to a stage that it is good.”

“Whatever you go into it is such a steep learning curve and I am in the deep end at the moment. In a few years time I will come out the other end and say ‘Jeez I needed that.’ Anyone who puts you into a softly, softly situation you will not get anything out of it.

“Rugby players are very self-critical but we have to learn to be patient, to accept we are not good at what we do [after the game] and just try to get better. That is the main challenge. I don’t have the same level of understanding, knowledge, depth of appreciation, nous in business to be the leader I’d like to be. I’ll get there.

And then, the unseen Leinster leader for over a decade links what the next generation of players must do to replicate previous success. But can this group, considering the increasing strain put on the squad, put on Cullen’s ability to select players by Ireland and with the growing investment by French and English clubs, still realistically win the Champions Cup?

“Of course they can. Hardy pros with a lot of hurt become better players. It takes time. No coach goes out and does it for you. A group of players has to drive it. I first saw that at Leicester.”

Experience and wisdom, only way to discover those attributes is perhaps to get lost for a while.

This article appeared in The Irish Times on Saturday, October 21st 2017.