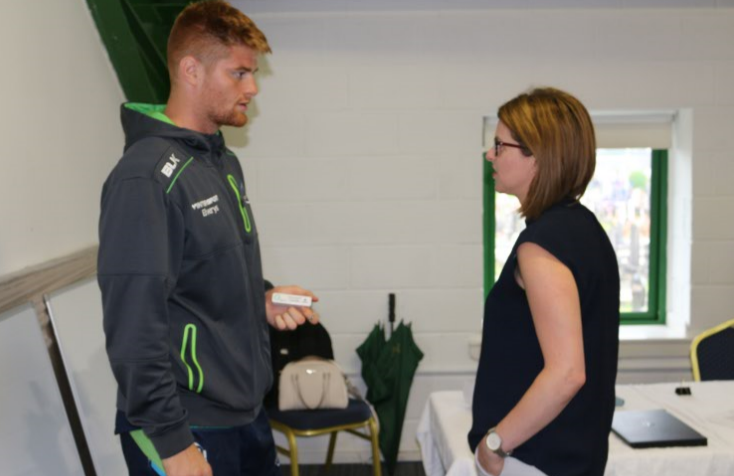 Player welfare in rugby is continuing to evolve in a positive and proactive manner, an important consideration when examining a sport whose constituents are bigger, stronger and faster than their predecessors in the game and where the collisions exact a significant physical toll.

Injury and concussion are primary and important considerations in any discussion relating to player wellbeing, but in an era when teenagers now view rugby as a professional career, the need to expand the duty of care to life off the pitch as well as on it, is undeniable.

This is borne out in examining the expanding role of Rugby Players Ireland in looking after the needs of players. Dr. Deirdre Lyons is the manager of the Player Development Programme (PDP), and also works as Player Development Manager (PDM) for Connacht, one of five PDMs employed by the association to assist players in various aspects of life. Deirdre is joined on the PDP team by Pamela Gilpin (Ulster), Nancy Chillingworth (Women’s Programme), Marcus Horan (Munster) and Dr. Ella McCabe (Leinster).

The Player Development Programme is comprised of five pillars: career advice and guidance, education, training and skills, personal brand, financial planning and management and player wellbeing. Over the course of a week, the PDMs will work out of their respective provincial hubs and are available to the players. In the last year, the PDMs have held over 860 individual meetings and have worked with over 80% of the senior players and over 95% of academy players. This individual approach has proven to be one of the most successful aspects of the programme.

“Initially we had one player development manager in Hamish Adams (now CEO at Rowing Ireland). He worked with all four provinces.” Deirdre explains. “The support, while great, was very reactive. But now with five managers we can be more proactive.”

Where once they exclusively dealt with the senior players, the PDMs can now help those in provincial academies and sub-academies to supplement the work already being done there. Each PDM in the case of Leinster, Ulster, Munster and Connacht works with roughly 80 players with each province being receptive to their work.

“We have strategically focused on the academy and sub-academy levels. They are a lot easier to get messages across to and they tend to work in a more focused and receptive way. If their manager says you have to go to this workshop, they will go.

“The hope is that by building that relationship with them, if an issue arises at senior level rugby, they are already used to you. Support seeking is one of the key skills that we try and get them to build while they are still young.

“Young players who are very talented occasionally bypass the academy stage. Rugby-wise they may be doing well but they don’t always possess the other [life] skills that we would be concerned about. Also, you see it in every province where an outstanding player [on the pitch] just can’t deal with the pressure or the regimen. The modern culture where some parents snowplough the way for their children, removing all obstacles and stress, can lead to an emotional immaturity and a difficulty in dealing with adversity. We sometimes find that in order to build resilience, you need to experience disappointment and stress. It’s about transition toughness, developing life skills to be able to deal with change. One thing that we have to be very careful of as player development managers is that we don’t do too much, that we don’t go and fight their battles for them all the time.”

The socioeconomic background of the majority of young rugby players makes it reasonably straightforward to encourage third level education in conjunction with their rugby careers but there is an equal demand from those who are the other end of the spectrum career-wise.
“By offering choice we get a lot more engagement. The players want different pathways so there’s no point in running generic courses. We try and build relationships with as many different partners as possible. We have a lot of scholarship opportunities. We work with the main institutes of technology and universities in our area. For me in Galway it’s GMIT and NUIG as well as private colleges to make sure that the flexibility is there. There are around 30 players in college in Connacht.”

While some players are receptive to seeking help, others are less inclined. Rugby Players Ireland PDMs understand the notion of pushing against a closed door. More often than not it’s finding that initial hook.

“Unsurprisingly, given rugby players love of coffee, one approach we used was organising a barista course with the help of 3Fe (Dublin), Badger and Dodo (Galway) and Bailies (Belfast). Some players who had never previously engaged came along. Meeting players in this kind of informal manner can make it easier for them to initiate that first meeting.”

The PDMs encourage all players to think about what they would like to do post rugby and not leave it until they are in the last six months of their final contract. They also offer referrals on financial advice on tax, pension and insurance and the need for long term planning.

“Players make money quite early but for most there will be a fall off a [financial] cliff after they retire and ahead of taking on other employment. The recession taught a lot of the senior players harsh lessons in relation to investments. Getting them to come to a financial management workshop can be a hard sell. This really needs to be sold from within the playing group, encouraging others to embrace these courses.

“It is the group in the middle, probably your 24-28 year olds, whose careers are flying and on the up, earning well, comfortable and have their degree behind them; they are the hardest to attract to something.”

The personal brand issue is an interesting example of how a player can indulge a passion while still playing rugby; Tommy Bowe’s branded shoe collection with Lloyd & Pryce illustrates this neatly. “Just because you’re Tommy Bowe the player doesn’t mean that you can’t be Tommy Bowe the entrepreneur. This is something that a lot of players are scared of; they think they have to be Brian O’Driscoll to have a’ brand’.

“It is much easier to concentrate on it while you are still playing rather than trying to do so when you are an ex-player. What we do find difficult is asking a 22-year-old, ‘what are you going to do after you have finished playing rugby?’ Some find it difficult to look beyond the here and now.

“Charity work and community engagement comes into this area a lot. Guys who are not interested in their later career might focus on coaching in the community.

“We have three levels of charity work. Players can volunteer, become an ambassador – where they are a face for the charity – or a board member. Some of our senior players have gone on the boards of the bigger charities and they learn so much from that experience.”

The high profile Tackle Your Feelings campaign has helped to train the spotlight on mental health issues. “You can imagine going to 40 or 50 guys and talking about mental health is not the easiest thing, but it is crucial.

“We do have a 24-hour helpline that the guys can call on at any time. We have also started identifying local counsellors that we can refer players to, should the need arise. Dealing with concussion, injury, not being selected, or being cut from a squad; there are a whole lot of mental health issues that affect the players. There is also confidentiality to everything we discuss with a player across everything.”

Each PDM can use multiple approaches to help players when they may be struggling. For example, Connacht flanker Jake Heenan, had a horrendous run with injury that pilfered 22 months of his young career. Counselling and psychological tools helped but so did starting an online degree course with the University of Copenhagen and charity work with Dochas don Óige and Ronald McDonald House.

Most of the player development managers have worked in high performance sport prior to joining Rugby Players Ireland. They are also advocates of their own professional development with several Masters qualifications and PdDs amongst the group.

“While an ex-player or athlete might gain an immediate rapport, once you have the qualifications, the respect and the relationships, it doesn’t matter whether you are a rugby player or if you have never experienced the game before. We might be the first person in their day to ask: how are you?”

Rugby Players Ireland is acutely aware of the challenges facing their retired and retiring players, especially around the process of transitioning into that retirement and often into a new career.

“We are still working with players who left the game in the past couple of years. What we have seen is players who are retired four or five years and embarked on a career are now going ‘this is not for me’.

“If they feel that way we try to encourage them to do career counselling and we’re also currently developing a transition booklet and the message will be, if the next career doesn’t work out don’t be afraid to come back and re-engage with us.”

Article by John O’Sullivan. Revised and updated by Richard McElwee.