There’s an irony at play as we speak to Dan Tuohy. A year into retirement, the former Irish international answers our virtual call from his office. His colossal frame finds just enough space amidst the boxes of masks that dominate the room.

Oscar Wilde has a saying that a ‘man is least himself when he talks in his own person. Give him a mask and he will tell you the truth.’ The Irish poet obviously wasn’t looking Tuohy in the eye when he coined that particular phrase.

At no stage during his career could the Bristol born forward have been accused of hiding away, on or off the field. Now in his new guise as the owner of the Belfast Mask Company, Tuohy continues to wear his heart on his sleeve. The honesty with which he approached the game remains rich, while the life lessons learned across 11 adventurous years in England, Ireland and France remain valid.

Tuohy maintains his integrity harks back to his days on the wing at Weston-super-Mare RFC in Somerset. He didn’t know much about the sport back then, but others reckoned the 6’4 teenager could certainly pack a punch. He embraced the rites of passage associated with life as an amateur rugby player, duly earning his stripes to become a valued member of the club on and off the field.

“I’ve probably always had an amateur outlook,” Touhy explains. “Sometimes it worked in my favour, at other times not so much. I look back on my career and there are things I’ve said and done that make me wince. On the flip side, I’m happy that I stayed true to who I was as a person, someone who was just another member of the community.”

Though impeded by his command of French, Tuohy became a much-liked character during his time at Vannes in the Pro D2. Even when the day came to call time on his career, he was in no rush to leave the Brittany area. Before the commute from Belfast was no longer practicable, Tuohy formed part of a coaching set-up that bid to have the club finally promoted to the Top 14. 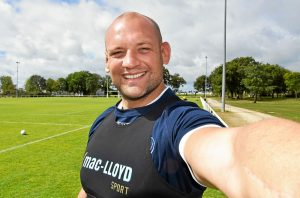 Now as he casts his eye back over to France, he sees his former club flying high with former Munster Rugby player Darren O’Shea occupying his old slot in the engine room. Yet Tuohy doesn’t begrudge them their success. Indeed, for several years he revelled in the offerings of a well-run club that never lost sight of its raison d’etre.

“There’s big money in the game now and with big money comes a murky side,” the former Ulster Rugby player says. “Guys are getting squeezed all the time. The game is a different beast to the one I first fell in love with it as a teenager. Even good lads who went into coaching have become very cynical. They’re paid to stress out and over analyse everything.

“It’s going down the road of ultra-professionalism like the Premier League or this supposed Super League. You don’t see those lads hanging out in their local areas and now rugby players are no longer enjoying the same relationship with the people they represent. The business stuff has taken the romance out of it a little bit.

“The way some of the clubs in the PROD2 are run would make you laugh but for all their faults they have a definite connection with their people. The beauty of rugby always lay in that relationship with the fans and the community.”

It seems Tuohy enjoyed many such laughs with his family in France yet he freely acknowledges that he is happiest being back amongst the people who cheered him on in Belfast for seven years. He also has a newfound appreciation for colloquial conversation and the array of the indoor amenities at his doorstep. For all its natural beauty, Brittany taught Tuohy not to take some things for granted.

“My French was ok but forming real bonds within the community was difficult. My kids for example, we could never have their friends over because I was afraid there’d be an emergency and I wouldn’t be comfortable dealing with that situation. Now they have their friends and cousins up the road!

“They’re just some of the many sacrifices my family had to make to support my career. So, lying on the hospital bed after my last injury I told my wife I was done… it didn’t have to be about me anymore.”

Having agreed to move closer to relatives back in Belfast, the new retiree was left twiddling his thumbs until a call came in from an acquaintance back in France. Having opened a store selling specialised anti-fog masks in Brive, unprecedented demand meant that there was scope for rapid expansion of the enterprise across Europe. Tuohy was given the option of taking the business into the UK and swiftly bought the rights to the product. 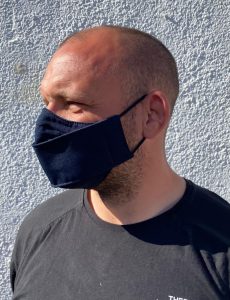 “If you look at Asia after the SARS outbreak, masks became part of the wardrobe,” Tuohy maintains. “At first wearing a mask was a bit alien to us but I think you’ll see them become part of life. I can’t see elderly people in densely populated areas without one for instance. I’ve carried out plenty of research. The materials used and the seals across the nose and cheeks solve a lot of problems for people, not least those who can’t wear their glasses anymore!

“As well as surgical and fashionable product, we expect to have a big corporate market too. I know there are new regulations coming into place and people intend to be flexible, but there won’t be thousands of derelict office blocks in the cities. I think you’ll find people returning to their offices as soon as they can and their employers will want to facilitate it by creating a safe environment to do so. We can help.”

Though he acknowledges (and hopes) that the same demand might not be there in ten years’ time, the experience of running a franchise is a far cry from when he first reached out to Rugby Players Ireland Player Development Manager Pamela Gilpin prior to his return to Northern Ireland. From exploring college options and limited work experience opportunities, Tuohy is suddenly processing multiple orders for individual and corporate clients, developing a network and honing his business acumen. 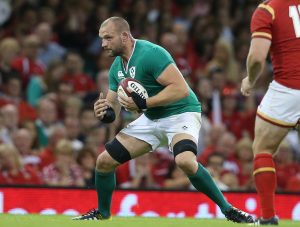 “I’m not a studious guy so I never took my personal development seriously,” Tuohy, who was capped 15 times by Ireland, admits. “When you’re a 25-year-old playing Test rugby, retirement seems like a world away. I was like ’pfft, I don’t need to be studying, I’m on good money and I’ve another ten years to make more!’ I’m extremely fortunate that this business has landed in my lap but I’m fully aware that if it doesn’t work out, I’ve nothing to fall back on.

“It’s sad that we have to use an element of fear to get players to engage,” he continues, “but I can empathise because I didn’t want anything to get in the way of my prep. I’m embarrassed when I think of Rugby Players Ireland doing all these things for me. Ultimately there comes a day when you won’t have other people to make things happen for you. That day comes in the blink of an eye.

“That being said, rugby was such a huge part of my life that there was a genuine concern I’d struggle without it. I’d read numerous articles and feared the worst. I guess the boredom has been tough but other than being a bit jealous of the boys winning a tight game, I can’t say I miss the anxieties, the rehab or the injuries… they’d have knocked the wind out of anyone’s sails.”

Simply hearing Tuohy list off his catalogue of ailments is a painful exercise. The most gruesome proving to be his last act on a rugby field. Having led out his side at a packed Stade de la Rabine, he was lifted by a teammate to receive the kick-off and landed with his arm in a different direction. Substantial nerve damage at 34 finally put paid to a gruelling career. 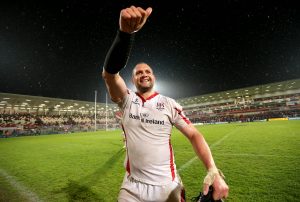 “That’s life!” Tuohy says with ample perspective. “These things happen, it was just my way. I’d already left my ego at the door in terms of what I wanted to do in the game. I’d nothing to prove to anyone and I wasn’t on big money so the risk-reward balance was gone. I’m just thankful I’ve made a full recovery and I’ve walked away from the game with all my faculties in place.

“I didn’t go out the way I might have wanted to. The previous season when a teammate retired the sun was shining and we had a barbecue with all his friends and family around him. He shook our hands and off he went. I never got that and as it turns out I wouldn’t have anyway. Nobody gets to write their own chapter.

“You have to make peace with your past. I underachieved in my career, but I also overachieved. I took up rugby at 18 from obscurity and made a go of it, but when I look back I see that I should have played more times for Ireland and Ulster and a lot of things beside. But no matter whether you played 20 games for your province or 200 games for your country, you should be judged on the person you are, not the career you had.

“That was a big hurdle I had to get over in my head and it was my kids that clicked me into gear. They don’t give a shit if I’m feeling down because I’m not a professional rugby player anymore. All they’re interested in is where their next meal is going to come from or how I’m going to entertain them. There’s no hiding!”