No Gripes or Regrets

Life is a circle they say. The end of one story is the beginning of the next. It’s funny how things come around, just ask Tom Gleeson.

“I was playing Ulster in Ravenhill on New Year’s Eve in 2011,” Gleeson begins. “I found myself in the full-back position and there was a two-on-one. Darren Cave was on the ball. Now, I knew him from playing with him for Irish Schools and he’d be a good friend but that day he was my opposite man and I was going to do everything in my power to stop him from scoring. I hit him pretty hard.”

It was a sorry night for Munster Rugby who suffered a 33-17 defeat, but the long journey home was an agonising one for Gleeson. The centre had made the tackle with his customary conviction yet had come off second best. Upon making it home to Cork he headed straight to the Mercy University Hospital where he now works as a doctor in the emergency department. 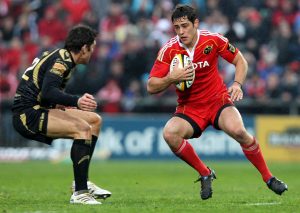 “I’m very philosophical about it to be honest,” Gleeson says of the moment that devastated his scapula and put an end his rugby career. “I’ve no gripes, absolutely not. I don’t play the moment over and over in my head. You put yourself in these positions. That’s the game.

“The way I see it I was lucky enough to play for Munster in the first place. Look, I know my career could have been better but that’s down to a number of factors – injuries, form, coaches taking a liking to you or not… I’ve made peace with how it all panned out.

“I think it’s important to put it into perspective. Many young lads would love the chance to play professional rugby. I’ve been very fortunate, I know that. I guess my dad’s illness changed my outlook on life. Things happen but so many things could be worse. Life moves on.”

A popular GP in Cork City, Ronan Gleeson was duty bound to the people of Cork’s north inner city throughout his son’s youth. Growing up in that environment and being at his father’s side as he battled the effects of a brain tumour undoubtedly impacted upon the PBC Cork student. Naturally, continuing his father’s legacy in the world of medicine was never far from his thoughts, even if rugby was to intervene for a time.

Trawling through the Munster Rugby archives we uncover an introductory Q&A with a younger version of the Bishopstown export. On top of being a bouncer in a former life, Gleeson reveals that he’d invite Jesus, Will Ferrell and the former Leeds Utd volley king Tony Yeboah to dinner. Then, when probed about where his future lies, he forecasts that he’ll do ‘some sort of Chemistry nerdy thing.’ And so it has materialised… albeit a little differently to others.

With six months left to run on his Munster Rugby contract, Gleeson did all in his power to get back to full fitness. He diligently set about his rehab and even managed to tog out for a game with Cork Constitution before the season’s end. Though he came through the fixture, he felt someway short of his best.

“It was at that stage that I got another opinion on my shoulder and realised that I needed to have surgery in order to have any chance of playing again. Obviously that was frustrating but it probably made me train harder in order to get back fit.

“I really went for it because I was faced by the prospect of no future in the sport I loved. I had to get back playing to put myself in the shop window and see what options were out there. Unfortunately it never recovered to a point where I could return to play and so I had to call it a day.” 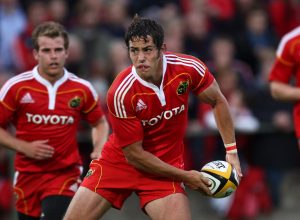 While still in the Munster academy, Gleeson obtained a degree in chemistry from UCC. Although he began to explore medicine at a post graduate level, the necessary building blocks weren’t in place by the time injury struck. It was yet another obstacle in the road, but rather than dwell on it Gleeson headed for Dublin for a masters in Immunology.

“That was a tough decision because I had been in Cork all of my life,” Gleeson admits. “But in hindsight it was probably the best decision I could have made too. As you know, places like Cork and Limerick are small and rugby mad. You’re recognised as a rugby player and very often that’s all people see. It’s your identity. It was easier to get out and start a new life somewhere else where nobody knew you.”

“I was too busy to get down about it. In that sense I was fortunate that I had an ultimate goal I could put my mind to. I mightn’t have known how it would play out, but I always had it in my head that I’d do it [medicine], I just had to figure out how. Of course, it wasn’t seamless and I can see how players find the transition difficult when they’ve no idea. They might have a degree, they might not – I don’t think that really matters if you don’t have an overall ambition.”

Gleeson would remain in the capital for a number of years having proceeded onto the Royal College of Surgeons where he qualified in 2018. Last week he was followed by Rugby Players Ireland members Claire Keohane and Angus Lloyd who have both graduated from the same institution and are ready to embark on their respective careers in the medicine world. 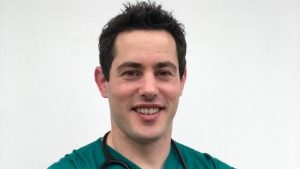 For everyone, plans are a little up in the air for the foreseeable. Yet the idle time also presents rugby players with an opportunity to map out a path through to the future. Beyond that, Gleeson encourages everyone to put their heads down and get through this phase which has been something of a baptism of fire for a doctor in his first year of practice.

“I hate the frontline word,” he proclaims. “I’m very much aware that I’m a first responder to patients coming through the door, but whether you have coronavirus or not we’ve to do our best to get the root of the problem and manage that. That’s our job. That’s what I was doing before this crisis and what I will be doing once it goes. It’s not worth dwelling on, you’ve got to be professional.

“On the other hand I’m still relatively new and it has been an amazing experience. Nobody has seen the likes of it before. We’ve gone through rigorous training, adapted facilities and doing all we can to minimise the risk. The HSE and public health authorities have been very good at ensuring we’re well rested. So far, all the measures appear to be working but we still have some way to go.”

Now back in Cork with his wife Wailam and daughter Ellura by his side, Gleeson will no doubt be looking forward to catching up with some familiar faces once restrictions lift. Going to a rugby match might be a little further down the line, but Gleeson will never be far away. 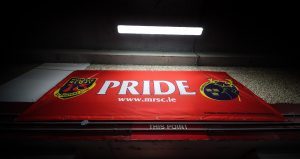 “I’m still a big Munster Rugby fan. I watch a lot of the games and I cheer them on like any fan as I always did. I’d still be in contact with lads like Billy Holland, Stephen Archer and a few others, so I enjoy going and supporting them.

“The reality is that guys my age are coming to the end, so those lacing up the boots are fewer and fewer. Most of them are now beside me on the sideline! But do I envy the careers they’ve had? Not a bit. I’m proud I had a part to play in the Munster story.”