Jack Carty launches next phase of the Tackle Your Feelings Campaign

Ireland and Connacht Rugby Player & Tackle Your Feelings ambassador, Jack Carty is encouraging people to be supportive and avoid trolling or scaremongering when using social media, especially now following the outbreak of the global pandemic, COVID-19.

Tackle Your Feelings was launched by Rugby Players Ireland and Zurich in 2016 and is funded by the Z Zurich Foundation. Today Jack was on hand to lend his support to the #ImTakingControl campaign which encourages people to ‘Take Control’ of their mental wellbeing using principles from both sport and positive psychology.

With many people working from home for the first time, and people around the country dealing with the impact of social distancing, many people are feeling lonely and isolated. Maintaining relationships will play a significant role in people’s mental wellbeing over the coming weeks and months.

Increasingly people will turn to social media, and many positive stories are being shared across platforms of how people have come together as a community to support each other, at a time when so many are worried about what the future holds.

However, social media can also be a negative space, with trolls using the platforms to be critical of other people, and others causing fear by sharing rumours and unverified information, which can contribute to feeling of anxiety and unfounded panic.

At a time when people can be more emotionally and mentally vulnerable, Carty is sharing his story of how he has coped with trolling on social media in the past. He acknowledges how social media can be a very positive thing but also the potential negativity that can come with it can have a significant impact on people’s mental wellbeing.

Carty offers advice on how he has put things into perspective.  He advises not to let things become bigger than they actually are, and for people to ‘take control’ using the Tackle Your Feelings App. 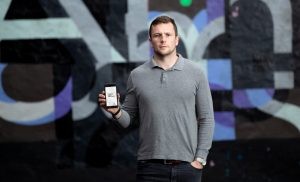 “I’m hoping my story will help people as they try to cope with this crisis we are facing over the coming weeks and months. My experience dealing with negativity on social media has helped shape who I am today as a person, rugby player, teammate and friend. It is important, not just for rugby players, but for everyone not to dwell on things they read on social media, both good or bad, and acknowledge when they’re feeling down.

“Talking to friends and family about what you’re feeling used to be seen as a weakness, but it’s not, it just makes the people who care about you more aware of how you’re feeling and ultimately that can only be a good thing. People need to remember that what they say on social media can have a big impact, and in these challenging times we should try to use these platforms to share positivity and to drive community spirit.”

Research, commissioned by Zurich & Rugby Players Ireland and conducted by iReach across the island of Ireland prior to the Covid-19 pandemic revealed:

Users can choose the Tackle Your Feelings resources they feel they need at the time. The app and website also feature sections on Relationships, Confidence, Happiness/Sadness, Sleep, Self-Care, Resilience, Anger, Relaxation, Optimism & Self-Awareness. It also has a mindfulness section where users can select from several mindfulness exercises.

Anthony Brennan, CEO, Zurich Ireland said: “With life as we know it changing at pace, maintaining and improving our mental wellbeing is more important than ever.  We have seen how role models like rugby players ‘taking control’ of their mental wellbeing can empower people to take action to improve their mental wellbeing. We believe Jack’s story will encourage people to be more proactive when it comes to minding their own mental health and wellbeing, using the app to incorporate it into their daily routine, and to be mindful of how they engage on social media.”

Tackle Your Feelings, Campaign Manager, RPI, Hannah McCormack, said: “It is great to be working with Jack Carty who understands both the positives and negatives that come with using social media. We hope his story inspires people to look out for each other online, especially at this time, when people are naturally using social media more than ever. It’s important for people to try to avoid scaremongering on social media and get their information from reputable sources like the HSE or WHO.

“People should also try to limit their time on social media and even take some time to curate their platforms and stop following anyone who makes them feel anxious. People can become part of the TYF community by downloading the App and following Tackle Your Feelings on Instagram, where we are sharing motivational stories along with positive mental wellbeing tips and exercises.”

Tackle Your Feelings is an innovative and unique approach to breaking down stigma around emotional wellbeing. Built on a foundation of diversity and inclusion, the campaign encompasses the whole island of Ireland and features some of Ireland’s most loved rugby players leading from the front, opening up about their own mental wellbeing challenges and the strategies they used to overcome them, so that people of Ireland can follow their lead.

Since its launch in 2016, Tackle Your Feelings has impacted the lives of people all over the world, with campaign content being viewed in excess of 23 million times. TYF has motivated people to be more proactive when it comes to looking after their mental wellbeing and has increased awareness around the importance of taking care of your mental health. TYF has also reached international audiences and has inspired similar campaigns across the globe, including; The English Rugby Players’ Association (RPA), ‘Lift the Weight’ campaign, New Zealand Rugby’s ‘HeadFirst’ campaign and Tackle Your Feelings Australia, a collaboration between Zurich Australia, the AFLPA and AFLCA.