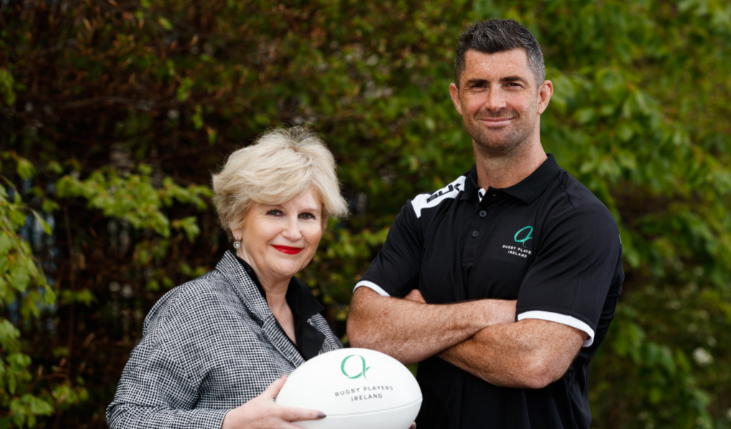 New Appointees to the Executive Board

Last week, Rugby Players Ireland took a further step towards realising its ambition to have Ireland be the best place in the world to play rugby.

The growing remit of the players’ association is reflected in the respective appointments of Louise Galvin (Women’s 7s), Ciara Griffin (Women’s XVs) and Greg O’Shea (Men’s 7s) to the Executive Board. The trio join Rob Kearney (Chair), Darren Cave, Eoin McKeon, Peter O’Mahony and Johnny Sexton to further ensure that the voices of all rugby players in Ireland are being heard.

Meanwhile, the appointment of Maura Quinn, Chief Executive of the Institute of Directors (IoD) in Ireland, is indicative of Rugby Players Ireland’s recognition of the need for an external perspective. Maura’s extensive experience will help to ensure effective corporate governance and board management. Maura joins former players Peter McKenna and Rugby Players Ireland CEO Simon Keogh as the non-player representatives on the Board.

Ronan O’Mahony, who recently announced his retirement from the game, has become an ambassador for the Children’s Ark at University Hospital Limerick. In a relationship that has been facilitated by Rugby Players Ireland, O’Mahony and Joy Neville will fly the flag for what is the only inpatient facility for sick children in the MidWest.

As we near the end of the season, we continued our series of workshops with Limerick Institute of Technology (LIT) to ensure that our Munster Rugby Academy members continue to fuel appropriately during the off-season!

On Wednesday, we were joined by Jack Carty and James Ryan as we unveiled the nominees for the Zurich Irish Rugby Awards 2019. Carty and Ryan, alongside Tadhg Beirne and Peter O’Mahony, have been acknowledged by their peers for some outstanding performances and will contest the Zurich Players’ Player of the Year Award on May 15th at the Clayton Hotel on the Burlington Road.

In all, there will be 11 awards presented on the night including the AIB Corporate Banking Men’s 7s Player of the Year which will be awarded for the first time at this year’s ceremony. Next week, our latest inductee into the BNY Mellon Rugby Players Ireland Hall of Fame will also be announced.

Our congratulations to all of those nominated!

Zurich Players’ Player of the Year

Volkswagen Try of the Year

The Times They Are A Changin’

As the season’s end approaches (how fast was that?), inevitably it is time for some of our members to say goodbye.

Former Munster Rugby player Duncan Casey announced that he will be retiring from the game at the end of the current Top 14 campaign. The Vodafone Medal for Excellence winner in 2018, flew the Irish nest over a year ago when he joined Grenoble as a medical joker and was retained by the French club into the current season. Once an established member of the Munster Rugby set-up, the former Ireland U20 international’s progress at the province was stunted by a series of injuries.

Meanwhile, Casey’s former teammate Jaco Taute has agreed to join Leicester Tigers ahead of the 2019/20 campaign. Taute enjoyed a meteroic rise in Munster red following his move from Super Rugby in 2016, featuring in the Pro14 Dream Team of the Season that year.

Taute will be joined at Welford Road by Leinster Rugby centre Noel Reid. At the recent Leinster Rugby Awards, tributes were paid to Reid’s commitment to the province and to that of fellow departees Tom Daly, Mick Kearney, Nick McCarthy, Jack McGrath, Ian Nagle and London Irish bound Sean O’Brien.

Meanwhile in Limerick, it was announced that Mike Sherry, Dave O’Callaghan and James Hart will also be finishing up with Munster Rugby, while Duncan Williams, who is set to feature in the AIL Final on Sunday, will also be moving on at the end of the season.

Elsewhere, it emerged that Jerry Sexton has earned a move to the Pro14 as he leaves the Jersey Reds to link up with the Isuzu Southern Kings in South Africa. Sexton is set to lineout against elder brother Johnny next season.

As the curtain begins to draw on the traditional rugby season, 7s rugby is set to shine for the summer months! Led by Ireland Women’s 7s players Niamh Byrne, Claire Keohane and Emma Murphy, Railway Union RFC will carry the Tackle Your Feelings message throughout a hectic schedule of tournaments over the coming weeks. Best of luck to all involved!