Hurley: “You don’t want to be sitting at home not able to work.”

This article by Sean McMahon was published by Pundit Arena on Friday, March 20 2020.

“Unchartered waters” and “the unknown” are two phrases which frequently crop up during a conversation with former Munster back and current Operations Manager with Rugby Players Ireland, Denis Hurley.

Of course, this can be applied to the livelihoods of everyone in Ireland.

Irish society is attempting to get to grips with a whole new way of living due to the outbreak of Coronavirus (Covid-19). Unfortunately for a significant portion of the population, they will suffer severe impacts; pay cuts, unemployment and tragically, the loss of loved ones.

Often what can cause the most anxiety is not knowing when this will end and when our lives can get back to normal. It’s that element of “the unknown” which can be the most concerning.

In Hurley’s role with Rugby Players Ireland, the association which represents professional rugby players in this country, those questions which have no answers are the ones currently being put on his doorstep. 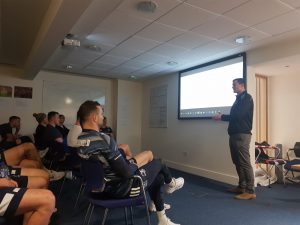 “I was up in Belfast last week just before things were closing down,” Hurley tells Pundit Arena.

“I got to sit in for a brief 20-minute spell with some of the senior leadership group of players up there and I suppose, some of the things they were uncertain about was where it’s all going to finish up.

“The message from players is that they want more information as much as possible, as much as anyone else on the street of how this virus can be transferred, what can we do better to protect ourselves and protect our families.”

Hurley’s role as Operations Manager is a wide-ranging one. Everything from offering advice and guidance to players, engaging the business community and securing funding for the association are all in his remit. 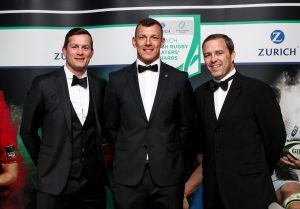 The 35-year-old has very recent experience of being a professional rugby player, having only retired from the game during the 2015/16 season. With the knowledge of what makes a rugby player tick, Hurley is well-placed to explain some of the pitfalls which these athletes could suffer from during this unprecedented period.

Naturally, rugby players are creatures of habit, their schedules are fine-tuned to minute detail. When all of that goes out the window. What then?

“I know they’ve been told to stay away from gyms, they’re taking on board all this advice that has been offered by health authorities in the country. That’s difficult as well because training on your own, you’re used to being part of a wider group, all training together. It’s new doing more individualised sessions, suddenly the normality of the day-to-day, going into a gym, going into team meetings…All of a sudden, it’s completely removed from their schedule. There’s only so much you can watch Netflix and that.”

There’s a potential benefit to all of this free time. Hurley explains that he is encouraging players to be productive by catching up on their studies if they are currently enrolled in courses. Even something like updating your LinkedIn profile can be of use.

“For us, we’re trying to stoke a few ideas with them and a few supplementary things that players can be doing. Looking at short online courses. Whether it’s working on their LinkedIn or something like that, just making sure they’re spending a bit of time on something that is a bit more conducive for the longer term.

“It’s those that are highly tuned to having the regiment. Even if it was only an hour or two a day of doing something that’s constructive would keep themselves in tune. I suppose for players, a lot of players, who look across the Sevens squads and the academies, a high number are actually studying. Of course, there’s another issue because we don’t know the exams might be able to go ahead or if they will be able to go ahead in the coming months. So there’s another difficulty.”

For some rugby players, this time of the year can be stressful due to contract negotiations taking place. Agreeing on a new deal, learning that your contract won’t be renewed or attempting to find a new club to sustain your livelihood can be an incredibly challenging time.

Hurley sees this difficult situation being exasperated by the current global pandemic. Unfortunately, due to the nature of the virus and the uncertainty of when it will no longer prove to impede the sport, it’s almost impossible to give sufficient advice to players in this area.

“It’s a difficult time because you have guys being released off contracts, they’re trying to find contracts elsewhere, potentially, there are guys planning their retirement. The current players, their re-contract is a question of what’s actually happening. We’re kind of under the cusp of this virus and we don’t know when or where it’s going to break and how it’s going to break.

“All we can do is best advise players. Keep the communication channels open between ourselves, the IRFU and the provinces so as soon as there is an update that players are aware of what’s happening because the last thing that they want to be, like anyone in any industry, you don’t want to be sitting at home not being able to work.”

At this time, people need to be proactive and work together in contributing to the reduction of the impact of Coronavirus in Ireland. Unfortunately, we have seen some incidences of that mantra not being adhered to, particularly among teenagers and the young demographic in this country.

From Hurley’s experience of speaking to players in the last fortnight, he senses a bit of “naivety” amongst the younger generation.

“I think sometimes, there maybe a little bit of naivety in some of the younger players potentially of about not realising the bigger, global scale effect of this virus.”

This brings us to the subject of role models and the contribution that rugby players can make in the current climate due to their influence.

Keith Earls recently posted an honest account of the respiratory problems his young daughter suffers from which puts her at particular risk from Coronavirus. It was a powerful message and one which no doubt had a profound impact.

“Knowing Keith for years and the difficulties that they’ve had in stabilising the conditions at home for themselves, for their daughter and that. They’ve had a few difficult years and thankfully they’re in a much better place than in the last number of years as she’s grown older. It just made people stand back and think a little bit more. It was brilliant.

“I think that in general, that rugby players can be role models and that they are actually taking up the baton at the moment and helping to share and reinforce the messages about the virus. The likes of Keith, there’s a bigger picture here which is the health and well-being like people like his daughter. The older age group and any of those that do have any respiratory deficiencies of any sort. It’s definitely a part that role models in sport have to play at the moment because they are probably being affected, those that are in a professional aspect of sport especially, that is their day-to-day, their bread and butter and unfortunately they’re not able to work similar to a lot of other industries.

“That’s the most positive thing that they can kind of give back right now, that reinforcement of the messages. I think that’s probably a key aspect for those individuals for now anyway.”

Hurley admits he and his colleagues are feeling somewhat frustrated in the current situation. It is their job to provide help and support but there are few solutions which exist in this uncertain time.

Ultimately the health and welfare of the players is what they are fully focussed on and this will be their top priority until there is some sort of clarification in the future.

“There are always things we can be doing on the sidelines but for now, we’re just waiting to hear when the next change is going to happen. We just don’t know.

“The hope would be that in a few weeks time that things might start to flatten out as they’re saying and there might be a potential of going back playing, going back training anyway in some shape or form.

“At the moment, the priority is the general health and welfare of the population and of our players.”