Back in the room for the first time since 2019, there was great excitement as former players Barry Murphy and Andrew Trimble took to the stage to host the Rugby Players Ireland Awards supported by Accenture 2022. Almost 70 players joined over 600 guests to celebrate the achievements of Ireland’s rugby players both on and off the field.

Our congratulations to our winners who were all chosen by their peers: 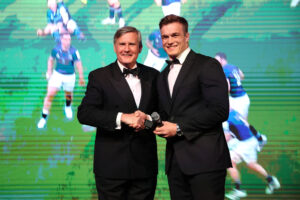 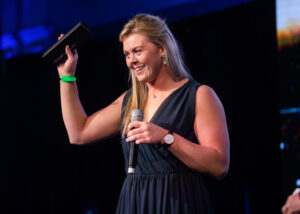 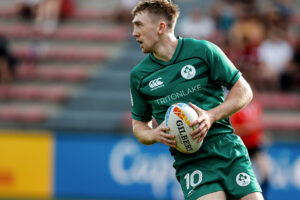 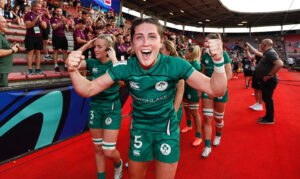 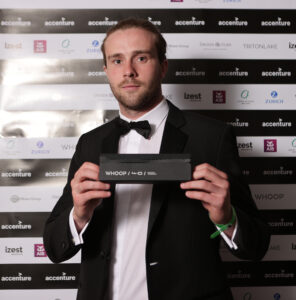 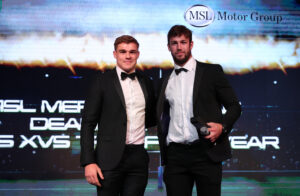 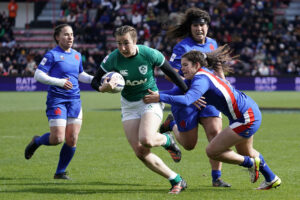 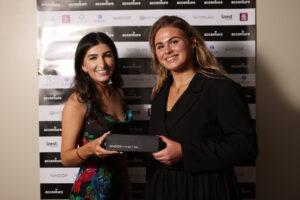 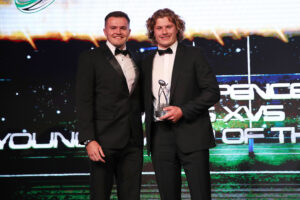 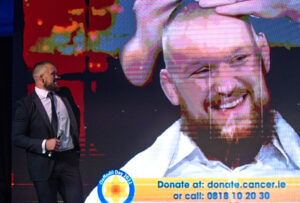 A special thanks to Andrew Porter and Aoibheann Reilly for helping us launch the event, while Vakh Abdaladze supplied some of the wine from his new company Taste of Georgia on the evening.

For a full gallery of the event, click here. 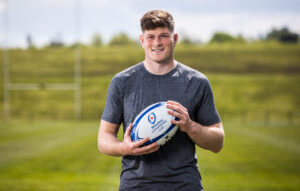 This year marks the fifth year of Rugby Players Ireland’s partnership with Heineken Ireland. Our thanks to Jack O’Donoghue who appeared on behalf of his players’ association in the lead up to the Heineken Champions Cup quarter-finals.

Delighted to also see that he Aviva Stadium will host the 2023 Heineken Champions Cup and EPCR Challenge Cup Finals. Dan Leavy and Mike Ross were on hand for the announcement that the showpiece event will return to Dublin for the first time in a decade. 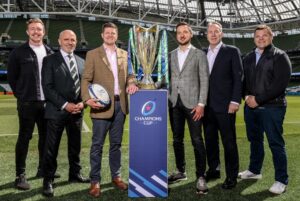 Taking over the World

Ireland’s good form on both the men’s and women’s World Series circuit continues to turn heads. 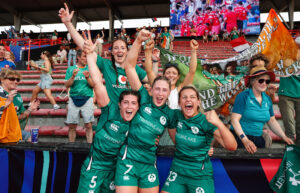 Having medalled in Langford, the Women’s 7s were unfortunate to miss out on another bronze in losing to Fiji following another impressive showing on the World Series stage. Captained by Lucy Mulhall, the team secured fourth place overall in this season’s World Series with the bronze in Canada adding to a historic silver in Seville. Tenth last year, the current campaign is demonstrative of the progress made by Aiden McNulty’s young squad who have showed impressive consistency with top five finishes at each of the last four tournaments.

On an individual level there was also cause for celebration. Having played in 34 World Series games this season, the TritonLake Women’s 7s Player of the Year Amee-Leigh Murphy Crowe‘s haul of 36 tries saw her top the World Series charts for the campaign while also bringing her Irish record total to 134 in 165 outings on the global stage. Her form also saw her named in the HSBC Dream Team.

The Irish Men’s 7s meanwhile, claimed a famous victory over South Africa in Toulouse before proceeding to a first-ever final where they were met by a buoyant Fiji who were out for revenge following Ireland’s first ever victory over the islanders last month. It was the side’s first medal since joining the World Series as a core team. A week later they finished in sixth place in London. 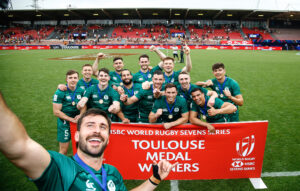 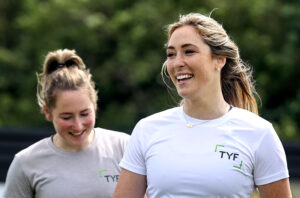 May was a busy month for the Tackle Your Feelings campaign with a number of players taking an active involvement in the mental wellbeing initiative. Amongst them was long-term TYF ambassador Eimear Considine who was joined by her sister Ailish in raising awareness of the TYF Schools Programme. Ailish, fresh from her success with the Adelaide Crows in the AFLW Grand Final, describes some of the challenges she faced growing up as Eimear’s younger sibling and in going to school back home in Co. Clare.

Tackle Your Feelings had a presence at WellFest where Dr Hannah McCormack was joined by Linda Djougang, Harry McNulty and Dr Emma Burrows. The team was also joined for a workshop at Uber in Limerick by RG Snyman and Chloe Pearse.

Slow the pace of your life on #MeditationDay with @JamesRyan126

By meditating & focusing on yourself you can reduce stress, improve brain function & wellbeing, and get a break from daily life.#TackleYourFeelings pic.twitter.com/PVLUALspPV 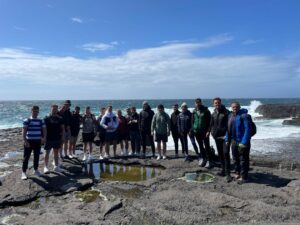 Dr Deirdre Lyons kicked off the month out in the wild with our Connacht Rugby academy members. More recently she was joined by Aoife Lane in Edgbaston where they contributed to discussions on education and training with fellow members of the Professional Players Federation.

Our thanks to Robbie Diack, Chris Henry, Paul Marshall and Andrew Trimble who contributed to a discussion on the transition out of the game with our Ulster Rugby members.

Ealing Trailfinders is becoming something of a hub for Irish players. In recent weeks both Ross Kane and Kevin O’Byrne have linked up with the club, while O’Byrne’s former teammate James Cronin is set for Leicester Tigers. Also headed for England is Jack Dunne who is to join Exeter Chiefs from next season. He will soon be the Premiership’s only ‘out’ player when he links up with the squad. Check out his honest and well-rounded interview with The Mail on Sunday here.

Meanwhile, all-time top try scorer for the province Matt Healy announced that he is retiring from professional rugby at the end of the season. As the month drew to a close both Michelle Claffey and Mick Kearney also drew the curtains on their respective rugby careers. 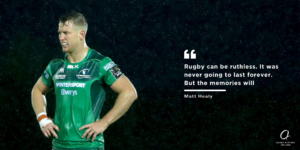 In Belfast, it was announced that Sean Reidy and David O’Connor will leave Ulster Rugby. Jack McGrath is also leaving the club and recommences his battle for full fitness. Others who have set off on the long road to recovery are Leinster’s Tommy O’Brien and Munster’s Jack Daly who have both suffered ACL injuries. We wish all well. 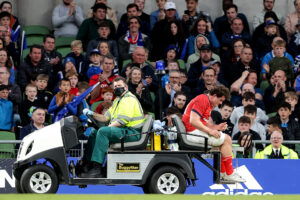 Josh van der Flier followed his winning of the Accenture Men’s XVs Players’ Player of the Year by claiming the European Player of the Year Award in the aftermath of Leinster’s loss to La Rochelle. James Lowe and Caelan Doris also featured on the shortlist. 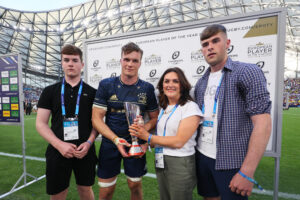 We were delighted to see Aoife Doyle named the Energia AIL Women’s Player of the Year this season. Connacht’s Cathal Forde won the Men’s Division 2B award. Doyle’s international teammates Linda Djougang, Neve Jones, Sam Monaghan and Eve Higgins were all named in the TikTok Women’s Six Nations Team of the Championship.

In the same week they scooped Connacht’s Player and Young Player of the Season accolades, Mack Hansen and Cian Prendergast also committed their long-term futures to Galway. They’ll continue to be joined by Tiernan O’Halloran who has extended his stay by one year while Keith Earls has signed with the IRFU until after the Rugby World Cup in France.

Congratulations also to Alan O’Connor of Ulster Rugby who has won the URC Tackle Machine 21/22 Award with 195 tackles at a success rate of 97.5%!

Congratulations to Joy Neville who has been appointed to the Rugby World Cup Referee Panel this year.

Ahead of the Champions Cup final featuring his former club, we spoke to Paul Wallace about his new business venture. Click on the image below for more. 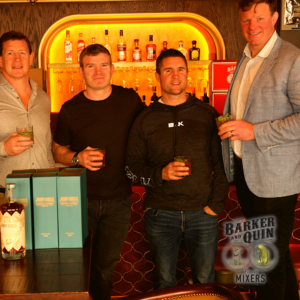 Leinster’s Assistant Coach and former out-half Felipe Contepomi will leave the club at the end of the season to take up a role as Michael Cheika’s assistant coach back home with Los Pumas.

Contepomi’s rivarly with Ronan O’Gara continues with the Munsterman claiming the latest battle with La Rochelle’s impressive win over Leinster Rugby in the Heineken Champions Cup Final. Donnacha Ryan also played an important role as the side’s forwards coach while Sean Dougall was the side’s Assistant S&C Coach following his recent retirement from the game. 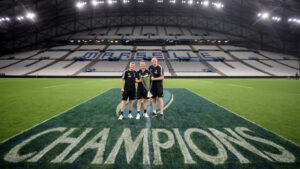 The Irish contingent’s former Munster Rugby teammate, Mike Prendergast is returning to Limerick as a member of the oaching staff in the coming weeks. The former scrum-half joins following a hugely successful period as a coach in France since 2013 with  Stade Francais, Oyannax Rugby, Grenoble FCG and Racing 92.

Ian Keatley will join Tommy O’Donnell on the coaching staff at UL Bohemians from next season.

Finally, in May we welcomed Sean O’Brien into our clubhouse. The former Leinster Rugby man, who was capped 56 times by Ireland, played the final game of a glittering career as London Irish’s season came to an end against Bath.