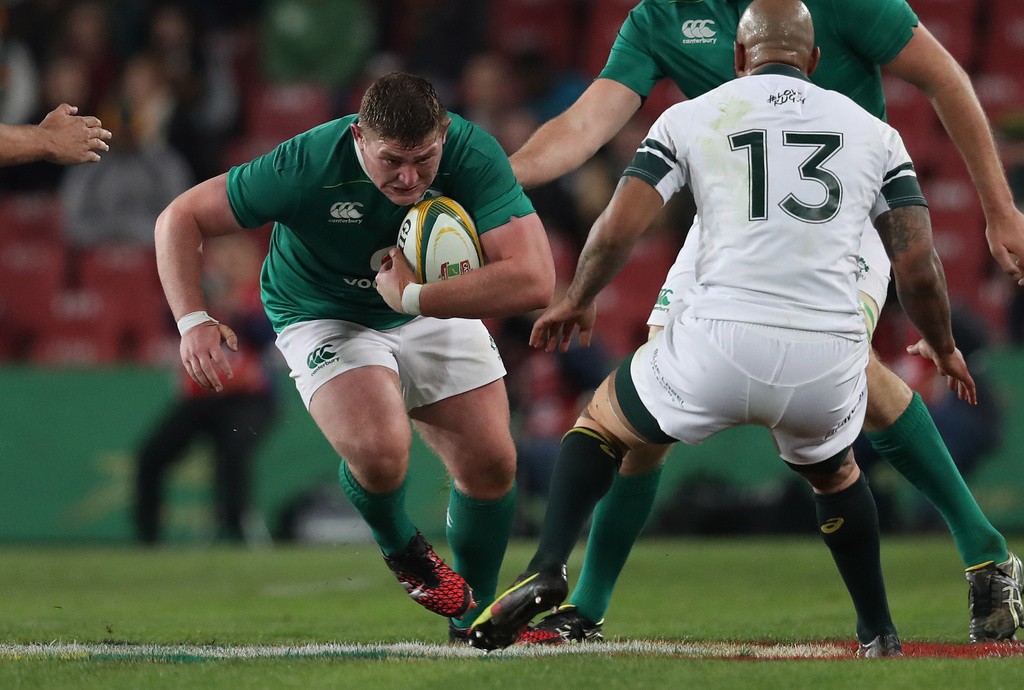 “To be on the line in the third Test pushing for a series victory, only to let it slip away is something that has plagued me all summer. We also had history in our sights with just 20 minutes to go the week before. I have been looking forward to getting it all out of my system for a while now.”

For Tadhg Furlong, the summer tour to South Africa was a bittersweet experience. Having come off the bench in the momentous victory in Cape Town, Furlong made his full Test debut a week later opposite Tendai Mtawirra.

For much of the encounter, the Beast struggled to contain the Wexford native in what was a clear demonstration of his Test credentials. At just 23, it seems clear that Furlong can look forward to a long future in the Irish front-row.

After what has seemed to be an all too brief off-season, Furlong and his Leinster colleagues kick-off their campaign on Saturday in the unfamiliar surrounds of Navan RFC (3pm).

“It was a relatively quick turnaround but while South Africa was testing it was also a really enjoyable tour in what is a rugby-mad country. We went on historical trips, on safari, got into the water with sharks and embraced the culture. Then there was the boon of representing my country at the weekend – not a bad complaint!

“From a personal perspective I felt that I had a decent tour. But international rugby is a massive step up. If you are struggling in a Pro 12 fixture, you can generally find a way back out. But if you get caught with a bad engagement or shoulder placement on the Test stage, the power that some of these guys can generate will blow you out of the water.

“I need to find consistency in those technical areas. When I sit down in the next few days to assess my goals for the season, that will be on my list and I’ll shape my training around it. For the moment though we’re barely back in the door after the summer. It’s all about maximising potential gains and putting ourselves in the best physical condition to take on the season.”

While Furlong has made great strides in recent seasons, the evergreen Mike Ross continues to play an important role for both club and country. But as he approaches his 37th birthday, he will know that he can’t fend off Furlong’s challenge forever. For now both men will be happy to continue to share the workload.

“It’s going to be a demanding season. Our performance in the Champions Cup last year is obviously something we will be looking to improve on this year. It’ll be important to get results early on so that we can build and progress from the group. That has to be the first goal.”

Castres Olympique, Montpellier and Northampton stand in the way of that objective.

In what will be a particularly busy period for Furlong, the New Ross man will be hoping to be involved in a challenging November series with Ireland. While the prospect of fronting up to the three northern hemisphere heavyweights within six months might have once frightened an Irish side, Furlong is excited about the prospect of the Australians and Canadians visiting Dublin, while he is also likely to face down the haka for the first time.

“Given how close the lads came in 2013 we’ll be keen to finally get one over on them [New Zealand]. Of course there’s a lot of water to go under the bridge between now and then but Chicago is looming larger on the horizon. Soldier Field will be a crazy atmosphere as I’ve no doubt that the Irish ex-pat community will make up most of the 80,000 capacity.”

Having coming so close to taking a giant scalp in South Africa, Ireland ultimately left the country with just one win from three. Would an evasive victory against New Zealand redeem their 2016?

“Obviously we will be looking at winning all of those games. If you consider that our squad was missing a lot of senior players in South Africa, we gave a good account of ourselves. Lads had to fill those big shoes and I think that experience will stand us in good stead. We never go into a set of games shooting for a 40% success rate. Irish rugby has to move beyond that.”

After a relaxing few weeks off that included the “greatest tour ever” to Barbados alongside a number of his international colleagues, Furlong now returns to a Leinster fold with a few notable absentees – both Eoin Reddan and Luke Fitzgerald have hung up their boots, Ben Te’o is now at Worcester Warriors while Isaac Boss has returned to his Kiwi roots.

“Given some of the premature retirements we’ve had recently I think it’s important to start developing skills that will help you adapt to life post-rugby. You never know what’s around the corner – this time last year Kevin McLaughlin was leading Leinster into a new season. I’m looking at my options at the moment.

“I finished my Business degree in DCU three years ago, so I’ve had a decent break from studying. But I’ve an ambition to take my education further now again so that I’m set up whenever that day comes – hopefully not for a long time. The books can actually provide a good distraction from all the rugby.”

By all accounts, Furlong is a keen student and this was evidenced when he sought to master new skills whilst on holiday.

“I struggled to get to grips with wakeboarding! I tried it a load of times and just couldn’t manage to stay up. But I couldn’t leave the place until I did. When it finally happened, it might have been so quick that the lads may have missed it but it was certainly satisfying! It’s actually getting bigger in Wexford, so maybe one day I’ll get back to it!”

With such determination and a thirst for knowledge, Furlong looks set to take his young career to new heights this season.