Rugby Players Ireland has today announced that Fiona Coghlan and Tommy Bowe will join a host of iconic Irish rugby heroes in the Rugby Players Ireland Hall of Fame. Both Bowe and Coghlan – who becomes the first female to be inducted – join the likes of Keith Wood (2004), Ronan O’Gara (2016) and Brian O’Driscoll (2018) in an illustrious list of previous winners. The award, which will be presented at a unique event at the InterContinental Dublin Hotel, was last won by Gordon D’Arcy in 2020.

Coghlan’s career is littered with unprecedented achievements. From playing an integral role in Ireland’s first victory over France, Coghlan would go on to lead her country to a similarly historic success over England en route to a first-ever Grand Slam title in the Women’s Six Nations of 2013. The following year Coghlan was widely lauded as Ireland claimed a sensational New Zealand scalp at the 2014 Rugby World Cup. Though she retired after the tournament, Coghlan would make a return in 2017 as captain of the Barbarians in the invitational team’s first women’s match. 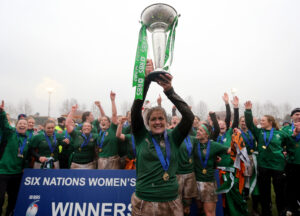 Having played her part in the development of women’s rugby in Ireland over the course of 85 international appearances and in the years that have followed, Coghlan has become a much-respected voice in the game and a key advocate for women’s rugby both in Ireland and beyond. She is also a regular contributor to RTÉ Sport’s rugby coverage. A PE and maths teacher, Coghlan is an ambassador for LauraLynn, Ireland’s Children’s Hospice, and Rugby Players Ireland’s charity partner.

Upon hearing of her induction, Coghlan said: “I never set out to be a rugby player and yet it became all I ever wanted to be. Today’s induction has given me the opportunity to reflect on a special time in my life, when experiences both good and bad were shared with the best of friends. To be recognised by them in this way is incredibly humbling.

“Once you retire it can be difficult to feel like you can have a tangible impact on the game,” Coghlan added. “Thankfully, women are finding new ways to find their voice. I’m grateful for the career I had and how it has given me the platform to help the generations to come.”

Meanwhile, Tommy Bowe inspired a generation as he sprinted clear at the Millenium Stadium in 2009. Despite a difficult introduction to his international career, the Monaghan born winger endeared himself to Irish fans through a series of instrumental performances on the field. In addition to the Grand Slam of 2009, he also played an integral role in Ireland Six Nations success of 2015 having returned from injury which forced him to miss the 2014 campaign. 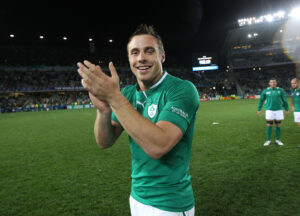 Over the course of a 14-year professional rugby career, Bowe was capped 69 times by his country, appearing at Rugby World Cups in 2011 and 2015. He was named the IRUPA Players’ Player of the Year in both 2008 and 2010. Bowe made over 100 appearances in two separate spells for Ulster Rugby, sandwiching a four-year stint with the Ospreys, while he was also started five Tests as the British & Irish Lions toured South Africa and Australia.

Reacting to the announcement, Bowe said: “I’m hugely honoured to be inducted into the Rugby Players Ireland Hall of Fame. I could never have imagined that one day my name might join some of the greatest names our sport has seen. Some of my teammates made it in before me and their presence goes some way to demonstrating how fortunate I was to play for Ireland when I did.

“Thankfully, through my young family and my work, I have found new inspirations in my life,” Bowe continued, “but now and then it’s nice to remind myself of the days when rugby was my main motivation. They were special times and while it’s impossible to recreate the bond you shared with your teammates in the changing room after a hard-fought win, I’m one of the lucky few to have been in there for the most historic of occasions.”

Simon Keogh, CEO at Rugby Players Ireland, stated that both Coghlan and Bowe will be remembered as two of the greatest players in Irish rugby history.

“In my time at Rugby Players Ireland, Fiona and Tommy have always shown themselves to be terrific ambassadors for the game. As individual characters, they transcend the sport. They have always been more than just rugby players. While this award recognises their on-field achievements, all they have done for the game at large is woven through their respective journeys. On behalf of their peers, it is my privilege to welcome them into our Hall of Fame.”