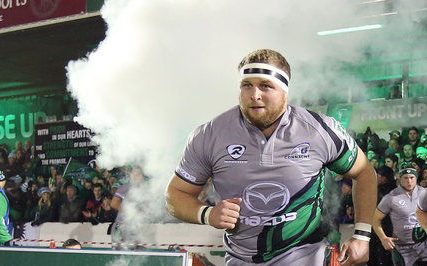 Retirement is like a bungee jump. It’s like falling off a cliff financially, emotionally, your social circle changes, your day-to-day routine and your whole concept about how you see yourself has changed. There’ll be just ups and downs until you get to a stage where you can take the rope off.”

January 18 2014. Brett Wilkinson is warmed-up and ready for a Heineken Cup game.

The surface is synthetic, the surrounding stands unfamiliar, but everything else is finely-tuned routine.

30 years of age, Wilkinson has lived in Ireland for eight years and plans to remain there playing rugby for at least half as long again.

He’s worn a different shade of green, representing Ireland Wolfhounds, but he’s best recognised for the 183 times he’s played for Connacht. On a lot of those occasions, there will have been many outside the Connacht dressing room who believed victory impossible. Perhaps never more than the match facing him now – Saracens away. 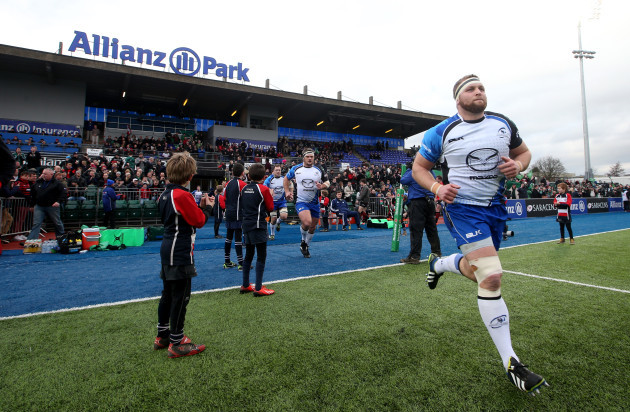 “I knew I had done something, and I went off,” Wilkinson tells The42, “but I didn’t think it was all that serious. As a rugby player you kind of… not that you feel invincible, but I thought ‘worst case scenario: I’ll go for surgery, they’ll patch me up, I’ll spend some time out and I’ll get back into it.”

Injuries, rugby players constantly say, are part of the game. You take your licks, switch your job focus onto rehabilitation and then use the time away from the field to strengthen resolve and determination as well as the muscles supporting your bones.

Unfortunately, Wilkinson’s ‘worst case scenario’ was cruelly undercut. For a prop, a pain in the neck is usually much more than a euphemism.

I tore my ligaments very high up, between (vertebrae) C1 and C2, right by my spinal cord, it was a lot more serious than I imagined. I was very lucky not to be paralysed.”

“It was kind of scary and when you go to the doctor and he puts it to you in black and white.

“There’s more to life than rugby. So you question your health and being able to walk. When he tells you: ‘you weren’t far from being paralysed,’ it’s a shock to the system.”

Just like that, a life’s work is pulled from under him and he’s ‘former rugby player Brett Wilkinson’.

For the flippant, the thought of a rugby player becoming a rugby coach doesn’t seem like any great leap. Yet between those two career paths, there is a mire of doubt, stress and reconstruction.

Professional rugby players live on a tightrope where they must constantly balance evidence from all around them that anybody can have a career ended in an instant, and yet compartmentalise all that knowledge – bury it deep – in order to unleash their all into every physical collision

In the sport’s amateur era, players had the same tightrope, but it was suspended much closer to sweet terra firma. The threat of the fall was comparably minimal. Up until 1995, most top class rugby players had a career path already progressing parallel to their rugby adventure. So when it came time to hang up the boots, it wasn’t so much a retirement as  a change to extra-curricular goals.

The weekends may have been altered forever, but the day-to-day routine usually remained unchanged. 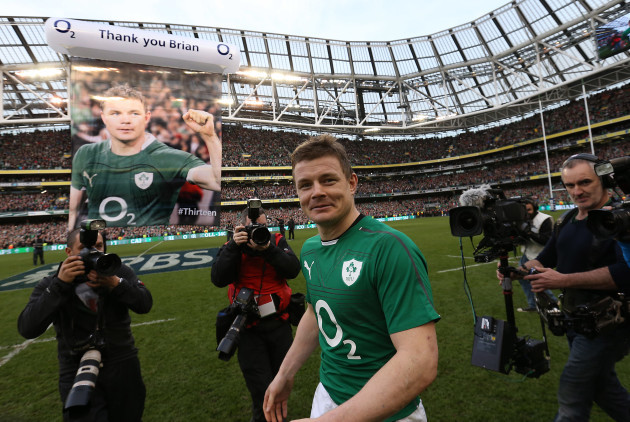 The modern day retirement farewells that stick in the memory are the lucky few who get to pick their own time to exit:  Brian O’Driscoll and the 50-foot picture of Brian O’Driscoll floating behind him, Richie McCaw stepped away with another World Cup in his hands or Ronan O’Gara bidding a tearful farewell after pushing Munster to another Heineken Cup semi-final.

The nature of rugby, however, with its ever-increasing physicality, means that the majority of careers in the game end prematurely, painfully and unexpectedly. But both kinds of exit will find similar challenges.

Dr Deirdre Lyons,  head of player development with Rugby Players Ireland works with players to help players round themselves and widen their interests from a mere ‘athletic identity’ – the sense that a player will identify and value themselves based on their on-field persona and performance.

“Players with a very strong athletic identity will struggle the most with transition,” explains Lyons, “saying that, there will always be a transition and a period of uncertainty or bitterness or a bit of emotion even if everything is planned to a tee.”

Rugby Players Ireland are an essential stop when thinking about the retirement of rugby players, the players’ association keeps close ties with their members throughout their career with the aim of preemptively preparing players to be, well, not players.

That can encompass education, retraining, networking or even the odd reality check. They’re big boys, but the difficulty involved with changing careers as a grown adult, perhaps just at the point  you felt the first one was getting going, cannot be underestimated.

“Even just mentioning to players about that emotional side (can help),” adds Lyons, “even if you’ve gone to college, got your degree, masters, got your work experience and retired on your own terms; there’s still going to be a period of leaving the sport.

“And you can be happy, sad, bitter… you’ve to allow yourself to feel those feelings and know it’s part of the transition process.” 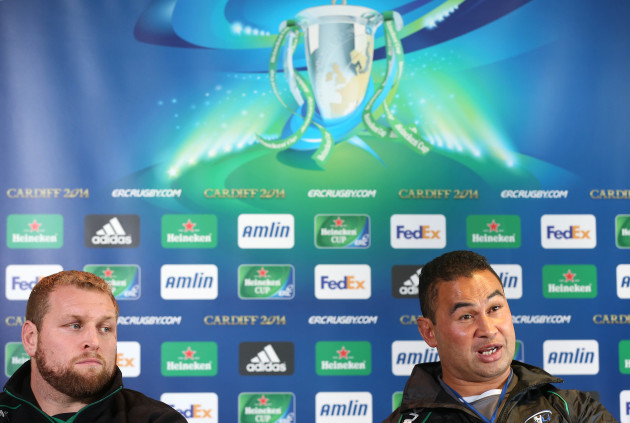 For Wilkinson, the athletic identity was strong.

“It took me, really, a year-and-a-half to find my feet. I was 30-years-old when it happened and I knew I had four, five maybe six years left in me.”

That confidence of knowing he would go on competing kept him from seriously inspecting the building blocks for what would come after. He had a third level degree in business management in his back pocket, but didn’t know what he wanted to do.

“You come from professional sport and you’re almost institutionalised: you’re told where to be, what to wear and everything is done for you. Suddenly that’s all gone, you don’t have that routine.”

For five months after Allianz Park, Wilkinson needed to wear a neck brace while his tendons healed. Exercise, the usual go-to recommendation to people who may need to keep their mind off a disheartening subject or freshen their outlook a touch, was off the table.

While he was still contracted with Connacht, he kept busy by hitting the video analysis room, recording scrums on matchday and relaying the information and relevant footage back to forwards coach Dan McFarland (soon to be Scotland’s forwards coach). But when summer came, it was time to step away from the circle of friends he had been part of since arriving from South Africa in 2006.

“Professional players, they’re in their own bubble and they’ve got their jobs to do. When you get pulled out of it and not part of it any more, that’s a tough part of it. The craic, joking and messing with lads, I miss it a lot. When you go into an office you can’t act the same way you do in a dressing room.”

And rest assured, Wilkinson has tasted both environments.

“The bills keep coming through the door,” the former loosehead says.

In late 2014 he took up work in a sales and marketing job. The fit may not have been ideal for him, but it brought him back to a daily structure for almost 18 months. It kept funds flowing and bought him time before he decided to follow his calling as a coach.

The issue of financial planning is rarely something we consider important for professional sportsmen. But retired sportsmen are a different story. And even the top end of rugby incomes are relatively modest compared to sports serving bigger markets.

“A 24-25 year old, whose career is going quite well will be earning a pretty good wage compared to his peers. The likelihood is that if he finishes, he’s then going to be behind his peers,” Dr. Lyons offers as example.

“So they have to be realistic about where they start in the workplace — if you’re going to go in as a graduate level position at 32, have you financially planned for the few years while you make up that loss?

“A realisation of what normal people earn can be a very good exercise to do with players.  If you’re going in to marketing, do you know how much you’re going to earn and how would you feel about earning that for three years. Have you planned for it?”

Rugby Players Ireland will happily admit that their job of helping players transition to a post-rugby career is massively aided by a deep-rooted culture in the sport. For a plethora of reasons, the majority of rugby players come through third level education and have a degree to their name by the time they get a senior professional contract with a province.

However, that nice university-stamped piece of paper can often gather dust on a wall to be of real use.

If they don’t have third level complete we’d maybe encourage them to return to college. It might be that they do a distance learning course, coming up to the end of their career they might not want to be going in to a class with 18, 19-year-olds.

That can be daunting on some players, especially if they’re well-known: ‘what happens if people think I’m thick?’  There’s a bit of a fear around it.”

“If a player is planning to go back to college – maybe they have to do two years of a masters course before going for the kind of role they want to. Has he financially planned for those two years when there is no income coming in?

“While we don’t give financial advice, we can point them in the direction of where to get it and maybe ask them some basic questions around their planning skills.”

The players’ union work, not only in the months surrounding a player’s retirement, but right through their career. A nudge here, a steer there guides players to build not only a skill-set and contacts to boost them into a new career, but also encourages them to hone in on what their interests and passions are outside of that athletic identity. 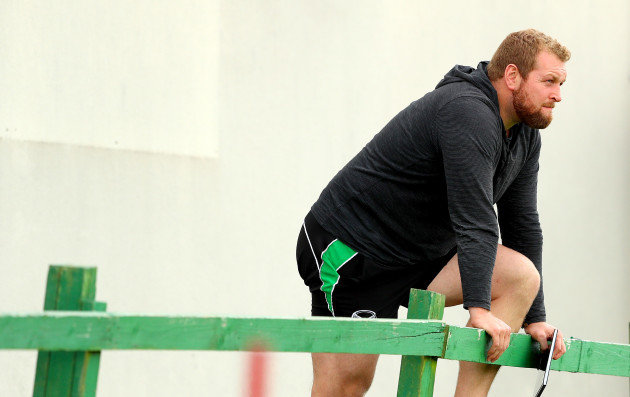 Through his stint in his office job  – “ in the real world” – Wilkinson managed to pick up the pace in coaching during his spare time, working through his coaching badges before taking up the post in Buccaneers RFC head coach in 2015.

Last summer, his role in the Athlone club was expanded to include the U20s and he’s never far from lending a helping hand with other teams.

These days, Wilkinson and Buccaneers are riding high, proudly sitting  on top of Ulster Bank League 1b having won eight on the bounce since opening-day defeat season and the ex-prop sounds every inch a coach as he plays down any reference to their run of form. ‘Halfway through the season, long way to go…’

It takes time, but with the help of his wife Patrice, close friends and a little guidance from Rugby Players Ireland Wilkinson has come through the bombshell of an early retirement and wound up still able to do a job he loves.

“It took a lot to adjust, there were some dark days, but you just have to get on with things I suppose.

“You look at the positives: I have my health and that’s the main thing. I’m able to live a good healthy life and that’s great.”