Instead of sharpening his studs this winter, Barry Daly will be sharpening his pencil. And a winger who once tackled Louis Picamoles, Bismarck du Plessis and Ruan Pienaar in a crunch Champions Cup tie, will spend his days tackling a Masters degree.

Now 28-years old, his rugby career is over.

Forty-three seconds elapsed as he mulled over the word to sum up that period in his life, each second feeling like a minute as his mind wandered through the four seasons, 36 games and 19 tries in a Leinster shirt, as well as that sliding doors moment when an injury in Glasgow cost him his chance of an Ireland cap.

“One word?” he asked before letting the silence drop.

Eventually, he settled on this one: achievement, the kind of thing a marathon runner would say after making it across the finishing line, the glory coming from the determination rather than the detail.

“You want to play forever,” he says, knowing now he’ll never play again, a jigsaw of scars on his knees reminding him of two injury ravaged years that brought an end to his professional career. 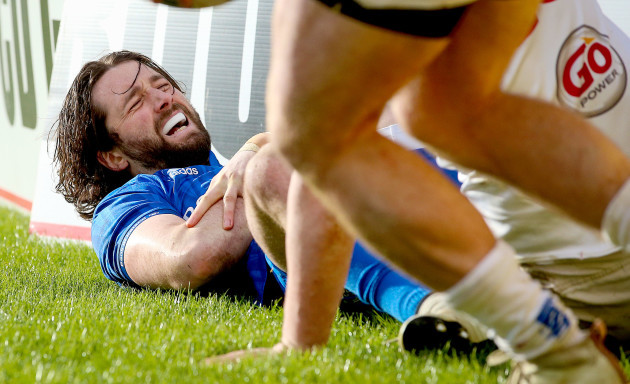 His story, he admits, is a little different than most. It ended for him last July when he was 27 but only really began a few weeks shy of his 24th birthday. “I’d given up on becoming a professional,” he said of a time when he didn’t make it into Leinster’s academy, when he drifted away from the sport, completing a primary degree in UCD, entering the nine-to-five world of accountancy.

“I continued to love it, but I’d kind of made up my mind it was not going to be my livelihood.”

Then, from nowhere, opportunity knocked. “A ridiculous chain of events,” presented him with a chance; Luke Fitzgerald getting injured; Cian Kelleher getting a move to Connacht; a gap opening up in the labour market. And suddenly this flier, who’d been picked up by the Irish Sevens squad a year earlier at an open trial event, was asked by one of the best sides in Europe if he wanted to come on a month-long trial, kind of like an X-Factor audition – minus the tears, the singing, the divas.

In any case, the judges said yes. The accountant was handing in his notice, venturing into unthinkable territory, his water cooler chats suddenly shared with Johnny Sexton; Rob Kearney; Jamie Heaslip.

It all sounds perfect yet it wasn’t. That first season, 2016/17, was a struggle, his thoughts of what pro rugby might be like, compared to its realities, being streets apart. Mentally, there was the detail players had to swot up on ahead of each game; physically there were the nagging pains that followed almost every training session, his body unused to the rigours of professional sport.

“It was a bigger learning curve than I’d anticipated. Maybe I was naive. Anyway it took a while.”

He got there. He learned how to take care of himself, saw the value of staying in rather than going out on a Saturday night, honing his body to a state of impressive toughness. Then in his sophomore year, he took off, scoring more tries than anyone else in a Leinster shirt as they completed the Champions Cup/Pro14 double.

His statistics were impressive in that 2017/18 campaign – 13 starts for Leinster; 13 tries. But professional sport has a habit of playing tortuous little tricks on the mind. It’s a well-worn cliché how this life doubles up as a dream job and a cruel experience, where the stakes are excessively high, the lows painfully deep. Daly’s stand-out year saw him feature 17 times for Leinster, yet miss out on 15 other weeks, often when the stadiums were fuller, the prize bigger. 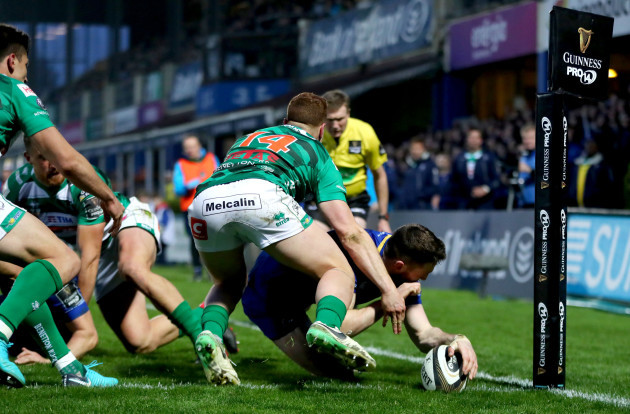 “That is the thing that takes the longest to get used to for any player coming up into a senior squad,” he says, “because when you are at the underage systems, more often than not, you are one of the best players, used to playing every week where the focus of the team is on you.

“Not playing every week, you don’t always get the chance to get into a rhythm. And when you do get the chance, and it doesn’t go your way, your thoughts tend to be, ‘oh my God, when am I going to get another crack at this?’ It can be difficult.

“The toughest part is the mental battle you go through inside your head. My first season, I didn’t really feel I had a claim to be annoyed when I wasn’t picked because I was still learning, I knew I still had time on my side to improve.”

The irony is that when things started to get better, things also started to get harder. By the time he was in his second year as a pro he had improved, finally cracking the defensive code Stuart Lancaster had introduced. He’d start the season on fire, score five tries in his first five games. What the stats don’t tell us is that in game number six, away to Glasgow, he’d pull up with an ankle injury days before the Ireland squad for the November internationals was named.

More than likely, Joe Schmidt would have called him up. Instead Schmidt was soon addressing the clamour for this kid called Jordan Larmour who got his big Leinster break in the week after Daly’s ankle gave way at Scotstoun. 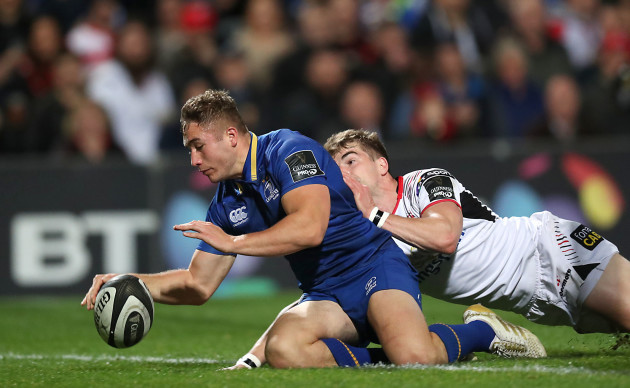 Worse still, by the time his ankle had recovered, someone else’s foot was in the door. At Leinster, there’s a lengthy queue for a first team call up.

“The hard times came when you felt you had done enough to merit selection, when you felt hard done by to miss out, but then the team went and won; and the fella who was picked ahead of you played amazingly well,” says Daly. “You asked the coach ‘why didn’t you pick me?’ And there was an easy answer. ‘Well, you know, why should I have? Look what happened without you’.”

Leo Cullen was consistently upfront, his door always open, his ears receptive to a defendant’s case. “You mightn’t come out of his office feeling better about things but he was clear about what you had to do to get in his side. I respected that.”

And despite the injuries, the selection heartaches, he isn’t seeking anyone’s sympathy. “Hey, it was an incredible time in my life.

“You worked with brilliant people. I don’t know what I can say that has not already been said about these guys, but the thing I always come back to is that everyone is held accountable (at Leinster) for everything they do, from the simplest thing like cleaning up the canteen after ourselves. Everyone gave their best every day because that was what was demanded of you.”

It paid off. Within a single conversation, Daly uses the following words and phrases: memorable, dreamlike, perfect, it was everything I ever wanted. But if there was one day he’d choose to relive over and over, it’s this one.

14 October, 2017. Montpellier. The RDS. His first European game. On the Wednesday of that week he heard his name called out by Cullen in the team room and can’t remember hearing anyone else’s. He played well that day, scored a try, Leinster won, his family was there. He really had made it. “That was the most fun I think I’ve had playing rugby. 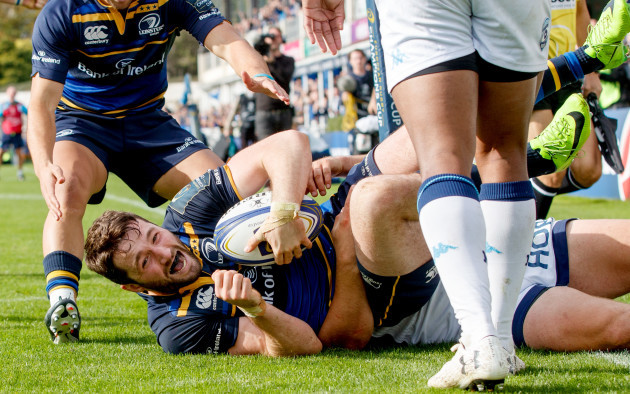 “Like we are talking about a big game, people know it matters and you are picked ahead of everyone else; you have put in the work, it’s not a Pro14 game where some people might watch it; some might not. Everyone tunes in for Champions Cup. There is a different feel to it. It was as good as it gets.”

It had taken years to build that dream; then just seconds to spoil it. A loose ball, an awkward landing, a six-week stretch in rehab. “When someone gets injured at Leinster, it’s almost routine that another player emerges from nowhere and does amazingly. When I look back, I can see it was incredible that year, but at the time there was regret that I didn’t do better. Maybe I could have done more.

“If I’d come back from injury two weeks earlier, had I got picked for certain games, maybe I could have got into the Irish squad – maybe I could have made my way into the Champions Cup squad, maybe I could have played in the Pro14 semi-final, final. Those are the big games that I always felt I was able to play in, do well in. Even though it was an amazing season, I was always thinking, oh God, I could have done a wee bit better.”

Time passes. Time cures. Time makes a player look at the medals he received for that Pro14 and Champions Cup season and view them with pride rather than hurt. “It’s a funny one because at the time, when I got them, I remember thinking ‘I don’t want them, I don’t need that’ because I felt I was going to play forever and was going to win ten more medals. So I was thinking; ‘I’ll get my own. I’ll play in finals’.

“With a bit of hindsight, I think back now and say, wow, I contributed to those in whatever small way. At the time I maybe didn’t give myself credit for the achievements I made; now I look back, I can be a little less hard on myself. Yeah, things didn’t go the way you wanted them to, but look, you gave it your best shot.”

They’re important words because if there is one thing you’ve noticed way too often about elite athletes, it is how all those years of self-denial and suffering brought them to a period of nothingness when the cheers stopped and the curtain fell. Suddenly they had to get on with the rest of their lives, and a Pro14 and Champions Cup medal were dubious barriers to protect someone from the trials and tribulations that life throws at you.

Daly understood all this. Work at KPMG prior to signing for Leinster gave him a grounding he never lost. Then, when the final year of his career was spent nursing a knee injury, he sought and took the advice of Ella McCabe from Rugby Players Ireland. Boston College were offering scholarships in Business and moving to the US offered an emotional as well as a geographic distance from a world that was now gone. “It would have been tough trying to find a job in Dublin, living 20 minutes down the road from the Leinster set-up, from your dream job, seeing the guys on the TV every week.”

It was the right choice. More than most he’d come to realise how even dream jobs come with terms and conditions and the last thing he wanted was to spend the rest of his life talking about what he did when he was 25. He left the medals at home but took the memories with him and life began again at 28.