Stephanie Carroll has many fond memories of Energia Park although the first is a little hazy. Back in April 2019, the Limerick flyer latched onto a pass from Leinster Rugby CCRO Daisy Earle to streak away and set Railway Union en route to their maiden AIL title. Few, if any, could get their hands on the winger all season except for the club’s President who nearly knocked her out in the ensuing celebrations. 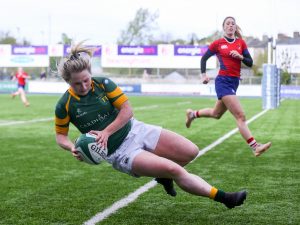 The second came just a few weeks ago as Carroll returned to Donnybrook with a Munster Rugby side who proceeded to claim their first interprovincial title in four years. It was a championship that proceeded to attract attention for all the wrong reasons but for Carroll it was a positive bookend on a difficult period in her young rugby career, for only a few months ago she was in a vastly different space.

“Carol Keenan at Rugby Players Ireland was the first person I told that I had been left go from the Sevens programme,” she reveals. “I guess some people may have realised I hadn’t been involved with Ireland much, but I was injured and we were in the middle of the pandemic.

“The whole thing really hurt and so I kept it to myself for a good long while. I think it was July before I eventually spoke to Carol about it and got it out into the world. I don’t think I anticipated how talking to someone, especially about something that was hurting so much, could be so relieving. It felt like a massive weight had been lifted from my shoulders.

“I think that was one of the reasons why I enjoyed the interpros so much,” Carroll muses. “Even though they were my first games back after injury and I was a little nervous, I felt under less pressure, if that makes sense? I found myself enjoying rugby more than I have for a couple of years. I was having fun again!

“It wasn’t a professional environment like the Sevens and we’ve all seen the social media clips but on a personal level it was really enjoyable. I guess beating Leinster in the final game was a nice way to round it out too!” 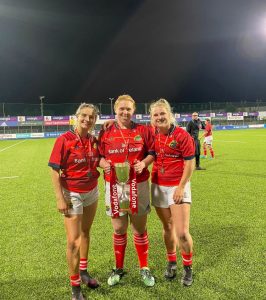 Carroll’s relationship with Rugby Players Ireland is a longstanding one. Previously she worked closely with Nancy ‘always good for the chats’ Chillingworth and Dr Vincent O’Flaherty as she settled into the Irish Sevens programme in 2018. Indeed, both were instrumental as she set about balancing her rugby with her work as a VAT trainee at BDO.

“When I first came to Dublin everything happened very quickly. After finding a place to live, I managed to get a job with BDO and then the Irish Sevens came calling. Thankfully, BDO were very accommodating and enabled me to chase what had always been a dream of mine – to play for my country.

“At the same time, I was definitely spreading myself very thin. There were some days I was at training or work in body but not much else. I’d get through it without letting it impact on things, but I found it hard to keep up with all the other expectations made of elite athletes. For instance, my recovery time was essentially at my desk in the office. Sometimes I struggled at work because I was so, so tired.

“I felt like the change of pace was the biggest issue and so I spoke to Nancy Chillingworth in the early stages because I felt I simply couldn’t do it. It was all too much. I couldn’t get over how calm Nancy was about the whole situation. She had me talk it out, helped me to organise my time and got me to consider what really needed to be done and when it needed to be done by.

“It turned out that I was committing myself to completing jobs within a couple of hours that would ordinarily take the day or more. I remember speaking to my manager one day and promising her that I’d get X,Y and Z done by a certain time. She told me not to be mad, that I could take more time with it. I was placing these demands on myself without talking about it and asking for help. That was probably my biggest learning in that first year.” 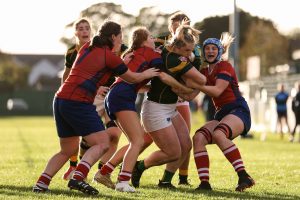 It proved to be a crucial one. Having returned from a broken leg, Carroll’s international ambitions were further hampered by a cruciate ligament injury and another lengthy spell on the sidelines. While less mobile players might countenance the impact of such an injury, Carroll was left in doubt that her trademark speed would return. She also had to go back to work with yet another calendar of surgeries and medical appointments to accommodate.

“When I broke my leg I think had only been in BDO about five months and had to take a few weeks off. They kept me in the loop and quickly brought me back up to speed when I was back in the office. They were unbelievably supportive.

“I tore my cruciate not long after and I really didn’t know how they would react. In some ways I was fortunate that we were already working from home because of the lockdown but nothing was ever an issue. That’s why I love working with the company and would dearly love to stay on. I mean, imagine if I had left BDO when I was so overwhelmed in the beginning? Where would I be now? I would have nothing.”

While Carroll is evidently relieved that her awareness of the bigger picture ensured her off-field career remained on track, she is nevertheless grateful for the opportunity to have experienced sport at an elite level with the Irish Sevens. She sees many benefits to her time in the programme, whilst also looking back on the experience with a pragmatic pair of rose-tinted glasses.

“People sometimes ask me if I’d considered pinning my colours to the mast and giving the rugby everything I had but if I’m honest with myself, I don’t think I was ever going to be a great Sevens player. Maybe that was always at the back of my mind.

“I would love the opportunity to play for the Women’s XVs in the future, so I’ve enjoyed getting to play with Munster and am looking forward to getting back to some senior rugby with Railway. I’ll see where the journey takes me but my ultimate goal is to play for Ireland again one day. 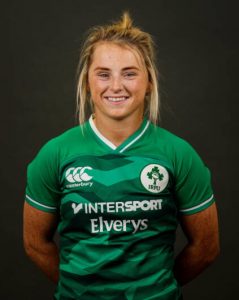 “That being said, I have no regrets. Trying to manage everything to such a high level instilled good habits and discipline that I can use in so many other ways. Sport always tends to be a good ice-breaker too and so I have been able to forge good relationships with people in professional environments. I like to think the people I work with also appreciate my commitment and the lengths I will go to when needs be.

“I still love rugby and I’ll always be grateful to the Sevens programme for how it developed my skillset,” Carroll asserts. “I know I’m a far better player now. When I first went into the system I couldn’t even pass! I’m still not very good at it apparently but my argument is that I don’t need to – I can get to where I need to go myself!

“I’m just glad that when one door shut I still had something at the end of it.”