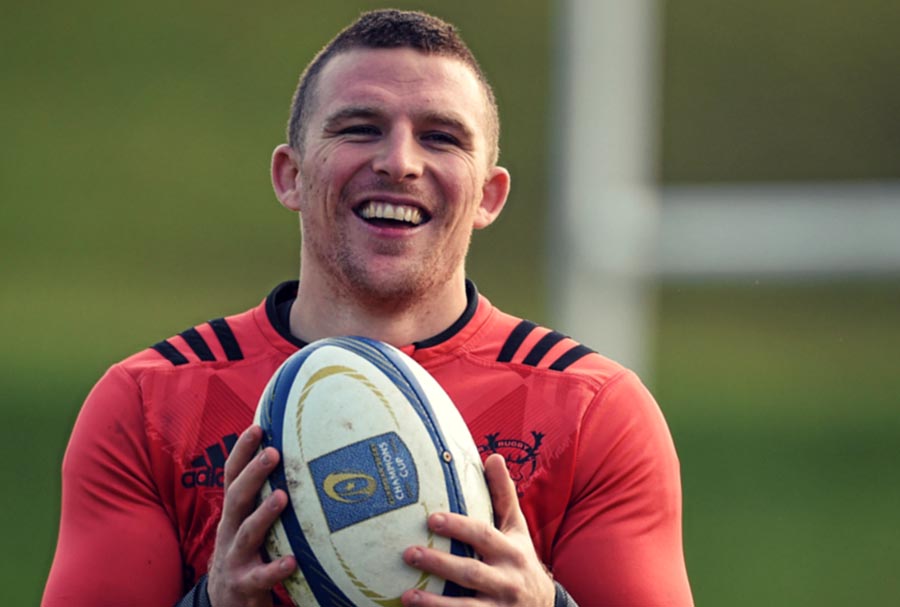 Conway first signed for Munster in 2013 and with a new two year contract just signed this season, he is firmly entrenched in the Munster squad. He is coming off an excellent individual season, one in which he was man of the match against Edinburgh in the Pro12. As a group it was a tough season for Munster, “Collectively it was not an enjoyable year. For various reasons but mainly from results on the pitch which then fed in to the general atmosphere around the training ground.” Conway has a great understanding of the importance of the collective team performance, this has made him a key figure within the back three in the Munster squad.
Growing up in Dublin meant playing for Leinster was the most obvious path. He first began to develop his skills in Leinster’s academy setup and went on to sign his first professional contract in 2010. This was obviously a dream come true and the road seemed laid out in front of him to become a household name within the province. A few season past and in the summer leading up to the 2013/2014 season he found himself moving to Munster and donning the famous red of Munster. The move south is certainly a road less travelled and I was intrigued as to how he found the process in switching between two great rivals; “The most difficult part was the night or two leading up to the move. I started thinking how easy it would be to have stayed where I was and travel 5 minutes from home up the road to get stuck in to a new season with my Leinster team mates. It was probably the biggest decision in my life at that point and I’m delighted that I made the tough decision for the right reasons as opposed to the easy decision for the wrong reasons.”

A new club brought new teammates and they were instrumental in helping Conway settle in to his new Limerick surroundings, “The lads made it easy for me to settle in and I remember Barry O’ Mahony (who has since retired through injury) would constantly be onto me to go for lunch, coffee etc. I’m sure the last thing he wanted at the start of pre-season was to be making small talk with me after a long tough day but that stuck with me as I knew he was trying to make me feel as at home as possible.” Conway is an advocate for moving within the four provinces if the move is the right one for the player, “I would encourage younger players to seek out the right opportunity for themselves on two levels. The new challenge should give them the chance to grow as a person and a player. This decision will be tough because the best opportunities don’t always lie with your local club.”
Being a professional rugby player can seem like the dream job to many but it has its difficulties, “I find both the physical and mental strains in the winter months fairly tough. When you’re playing tough games back to back in bad weather the body starts to ache a bit more and its a mental battle to pull yourself through those weeks. In saying that, it becomes a whole lot easier when you’re winning those games.”
Like most players Conway is conscious of a life after rugby, “I think one of the best aspects about being a professional athlete is it allows you time to figure out what direction you want to go after your playing career is over. Not many people are lucky enough to have time to figure out what they would like to do in their professional career, while being paid to play a sport that they love.”
“I’ve always used the Rugby Players Ireland services over the years but I’m using them more and more as the years go on. Having such quality and experienced people at our disposal is priceless while we are trying to concentrate on having a successful rugby career but not forgetting that real life is going on around us also. From talking to a few of the lads that have unfortunately had to retire early, it’s clear that Rugby Players Ireland play a vital role in the transition out of rugby with the nitty gritty details that we would all find extremely hard to deal with at such a tough time in any athlete’s life.”

Professional athletes often get asked whether or not I would want my kids to follow the same path. Conway says: “I’d love my children to be professional athletes in general not just rugby specific. It’s a unique way to learn and grow as a person and presents incredible challenges as well as highs and lows that not many people are fortunate enough to be involved in.”
Being at the heart of professional rugby I wonder would Conway like to try any other sport. “I’d love to give boxing or mixed martial arts a try. It is border line sad on how big a fan I am of Conor McGregor, so I’d love to be able to get in the ring or the octagon.”