A Degree in one Hand, a Rugby Career in the Other

At just 22 years of age, Jack O’Sullivan’s CV is pretty remarkable. As a student at PBC Cork he won all that was available to him before being fast-tracked into the Munster Rugby academy. Already an established member of the senior squad, O’Sullivan has also managed to get a Finance degree from UCC under his belt without delay.

“It hasn’t been easy!” O’Sullivan says. “There have been plenty of stressful times along the way, that’s for sure. The first few years were about getting through whereas over the past year I’ve had to really perform. I knuckled down to put myself in a good position by Christmas and just did my best to stick with it.” 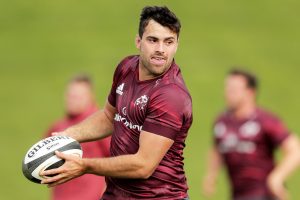 Over the course of his four-year stint at UCC as both a student and professional athlete, O’Sullivan has had considerable demands placed on his time, yet many of the pressure points he encountered were eased by the support system at his disposal. Marcus Horan maintains regular contact with Jack Casey, the Rugby Development Officer at UCC while as manager of the Quercus Talented Students’ Programme, Michelle Power has been an equally influential point of contact.

“In fairness to UCC they have been incredibly facilitating,” O’Sullivan points out. “Having to do mandatory placements while mainly based in Limerick was always going to be difficult but they sorted me out, as they did with extensions and other requests. By being so helpful I think it encourages you to make sure their support is justified.”

While O’Sullivan is happy to pass the praise, Jack Casey would put the backrower’s successful spell in UCC down to O’Sullivan’s character. Throughout his time at UCC, Casey has seen several players come through the gates at the Mardyke and onto the study halls on campus. While many succeeded, others struggled to make the most of the opportunity.

“It all comes down to individual responsibility,” Casey surmises. “We’ll do all we can for the player but ultimately there needs to be engagement and buy-in from staff. That will only come if the players are committed to making their academics work. Over the years we’ve had players come through expecting everything to be done for them. It doesn’t work like that.

“I think of Cian Bohane who Marcus also linked me in with. He’s an unbelievably good role model for these guys in a number of ways. Early on he recognised that the rugby wasn’t going to happen for him as he had hoped. He approached his studies with the same consummate professionalism he approached the game with. We made a plan, he followed it to a tee and it was executed.

“John Hodnett is another example. He’s in a time-consuming course and through connectivity and organisation, we put a programme in place while remaining respectful to the integrity of the course and others within his year. The real ticker was that he also did what he said he’d do. These guys know what it takes to get things over the line.” 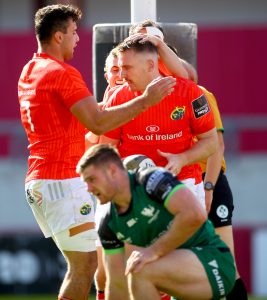 In addition to support staff in the UCC community, O’Sullivan has been able to lean on others within the Munster camp. UCC alumni Niall (Law) and Rory (Finance) Scannell are his cousins, while Shane Daly (also Finance) was at hand for advice on how to manage his commitments. A recipient of the Goodbody/Rugby Players Ireland Personal Development Bursary, Daly was also able to pass on handy study notes.

“I got a call from Marcus in the week leading up to Shane Daly’s debut,” Casey recalls. “He was due to have an exam on the day of the game against Ulster so I arranged for him to sit it in an accountancy firm in Belfast that morning. Shane isn’t a member of the rugby club, but was a student looking for support which we were happy to help with. It goes to show that we try to work closely with Munster Rugby, not against them.

“Of course, we might not see a lot of our contracted players much but that doesn’t matter to us. If we have them for a half dozen games, great. If not, so be it. What’s important is that these individuals get the best out of themselves and play at the highest level they can.

“The studies show that a happy student is a happy athlete. If Jack O’Sullivan is worrying about deadlines ahead of a Munster game or whether he’ll be picked to play for UCC when he’s available for us for the first time in a few weeks, it does nobody any good. We map it all out and set our goals well in advance so that we’re all on the same page.”

It’s clear that O’Sullivan appreciates all the support he receives. Even though his time as a student at UCC has come to a close he has no intention of parting with the famous red and black strip. While his hope is that his professional career kicks on, he’ll never down an opportunity to run out on the pitch that famously hosted the All Blacks. 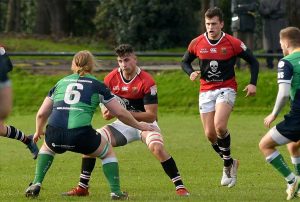 “I love playing with UCC and will play here until they tell me to leave,” O’Sullivan says. “I won’t be around as much as I’ll be putting the study on hold for a while but I’ve put a lot into the past four years so I think I’m entitled to lay off the books for a bit. My priority now is to progress with Munster.

“It has been a tough year. The study has been pretty relentless while the uncertainty around the rugby was difficult to deal with. I couldn’t build much momentum and so there were stages in the season when I wasn’t getting picked which was frustrating.

“Then I look at it on the whole and I can see that then when the rugby wasn’t going well it actually played into my hands from a study perspective. I could switch my focus into something productive. That benefitted my rugby too because I was able to switch back into gear when I needed. I ended up putting a good run of games together and got a Finance degree to show for it too!”

Jack Casey is immensely proud of what the club and the University have achieved over the years, especially through Quercus which also counts Hodnett, Irish U20s captain Alex Kendellen, Louis Bruce and Scott Buckley amongst its incumbents. The team effort has seen many players go on to fulfil their rugby ambitions while others have been suitably prepared for a life without the game.

“Professional rugby is ruthless. It’s a hard existence. Only a small percentage go all the way. The one bit of advice I try to give all players is to leverage all the support they can get whether that’s through us here, Rugby Players Ireland or whoever is willing to support them. Don’t be afraid to ask for help. It’s not monumental, it’s only aligning stuff. Providing solutions to potential problems.

“It’s a team effort between the departments. We promote the support structure, the dual career. If they need something, we can sort it but the player needs to play their part also.

“As a rugby club, success for us is seeing people like Jack leave with a degree in one hand and a rugby career in the other having enjoyed the college experience. We’re thrilled for him.”