Competitors on the pitch and great friends off it, Jack Carty and John Cooney have today teamed up with the Tackle Your Feelings campaign, to release a new video , highlighting the importance of their friendship and how they have leaned on each other at critical points in their careers.

The video explores friendship, compassion, resilience, dealing with family tragedy as well as first impressions of each other, pranks and aliens, showing how close the two players truly are. All of this is covered whilst competing against each other in Connacht Head Coach Andy Friend’s kicking challenge – a challenge only a handful of players have completed, Jack shares who during the video! 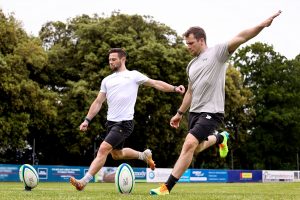 In the video, Jack reveals that in a recent Guinness PRO14 Rainbow Cup game between Connacht and Ulster, John realised Jack was struggling after kicking two balls out on the full in the game, so John approached Jack to encourage him to keep going. Jack describes the moment as a ‘strange experience but reminded him that rugby is only a game’. John  discloses this is something former Wales International Jamie Roberts did for him previously. John believes that moments like this are important for players, especially those who can be struggling, and reveals that he sees Jack as ‘his friend more than a competitor across the field’. 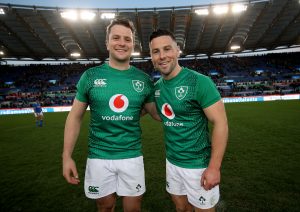 Jack and John also discuss the times they shared while both playing together for Connacht and how being open with each other during this time helped them to develop their friendship into what it is today. Now, despite being provincial rivals, they remain as close as ever and are very comfortable reaching out to one another to discuss their thoughts and emotions, especially when going through tough times both on and off the pitch.

Tackle Your Feelings is a mental health and wellbeing campaign, run by Rugby Players Ireland and funded by the Z Zurich Foundation, that encourages people to ‘Take Control’ of their mental wellbeing using principles from both sport and positive psychology. The TYF app encourages people to be proactive about their mental wellbeing, with research revealing that less than half the people on the island of Ireland (48%) don’t actively manage their mental wellbeing as part of their daily routine. Users can choose the Tackle Your Feelings resources they feel they need at the time. The app and website also feature sections on Relationships, Confidence, Happiness/Sadness, Sleep, Self-Care, Resilience, Anger, Relaxation, Optimism and Self-Awareness. It also has a mindfulness section where users can select from several mindfulness exercises.

Commenting on the #ImTakingControl campaign, Ireland and Connacht Rugby Player and Tackle Your Feelings ambassador Jack Carty said: “I understand that as rugby players, John and I are very lucky to be able to do what we do. However, we still go through a lot of ups and downs on a daily basis.  I’m hoping that our story encourages people to reach out to a friend or family member when they’re having a tough time so that they can be better equipped to manage their mental wellbeing. Talking to loved ones and friends about how you’re feeling can make them more aware of what you’re going through and, ultimately, that can only be helpful.”

Ireland and Ulster Rugby player and Tackle Your Feelings ambassador, John Cooney added: “Jack and I have gone through a lot in our careers so far and it hasn’t always been easy for either of us. I truly believe that our friendship has at times motivated us to do well on the pitch but also reminded us that rugby is not always the most important thing in life. Hopefully, by looking at our friendship, it reminds other people to feel comfortable when discussing mental wellbeing with their own friends and family”

Anthony Brennan, CEO, Zurich Ireland said: “We at Zurich are delighted to support this latest initiative from Tackle Your Feelings which aims to highlight the importance of friendship and resilience when it comes to managing our mental wellbeing. We believe Jack and John’s stories where they have used their friendship to ‘take control’ of their own mental wellbeing will inspire the general Irish public to be more proactive when it comes to minding their own mental health”

Speaking about the launch of the video, Tackle Your Feelings Campaign Manager, RPI, Hannah McCormack, said: “This video is an important way of highlighting the positive impact which having a close personal friend can have on your mental health wellbeing. Tackle Your Feelings encourages people to be open and honest when managing their mental health, this can be so much easier when you have a compassionate friend to share your experiences with.”

Tackle Your Feelings is an innovative and unique approach to breaking down stigma around emotional wellbeing. Built on a foundation of diversity and inclusion, the campaign encompasses the whole island of Ireland and features some of Ireland’s most loved rugby players leading from the front, opening up about their own mental wellbeing challenges and the strategies they used to overcome them, so that people of Ireland can follow their lead.