Celebrations went long into St Patrick’s weekend as the Irish Legends retained the Stuart Mangan Memorial Cup following a 22-22 draw with their English counterparts on the eve of the Grand Slam showdown in London.

Many familiar (albeit weathered) faces dusted down their boots and played out an enjoyable spectacle before over 6,000 faces at the Twickenham Stoop. Led by Shane Byrne, Ireland took the cup home having won the 2017 fixture at the RDS. 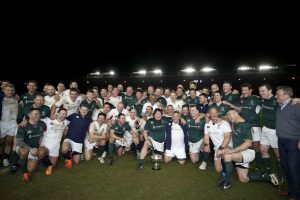 A scrappy start – attributed to warming limbs – did not take away from what ultimately proved to be an exhibition of the skills of old with Paddy Wallace’s cheeky dummy en route to the tryline setting the tone for the evening.

England’s Iain Balshaw was a notable contributor throughout the evening and it was his early break that got the competitive juices flowing. However, while the legs were moving the hands were yet to catch up. Ireland sought to capitalise with Gordon D’Arcy to the fore. In releasing his widemen, Ireland looked very potent in attack with many of the English in attendance sitting up to take notice.  Suddenly we had a livelier contest than they had anticipated!

For much of the evening, Ireland displayed plenty of quality with Gavin Duffy and John Kelly forming a very capable midfield partnership. Meanwhile, a little further afield, recent retiree Fionn Carr was a constant thorn in an England side who simply couldn’t keep up with the former Ireland 7s player. That being said, the Irish defence was not up to the same standard and the two-times capped Spencer Brown spotted a welcome sign in the middle of the Irish defence. A converted try put England into a narrow lead, before James Downey made his presence felt, crashing through from close range to restore proper order. 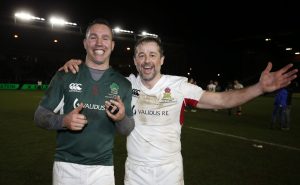 While many old friendships were reignited, the game also provided plenty of opportunities to renew old rivalries. When former Ireland and Munster legend Mick Galwey entered the fray, it wasn’t long before he was on the receiving end of a tasty hand-off to the face. Despite the former Irish captain’s intent to settles a few scores, it was England who had the last laugh with Chris Sheasby, the former 7s World Cup winner, levelling the scores at the break.

There were a few eyebrows raised after half-time as England flew out of the blocks while Ireland appeared sluggish. Nobody bothered to check their dressing room fridge, but when Ollie Phillips and Dan Scarbrough put further  between the sides, it became clear that  at the start of the second half and they got two tries through Ollie Phillips and Dan Scarbrough. The former showed electric pace up the left wing to evade the Irish defence while Scarbrough danced over from close range to give England a 22-12 advantage.

For Ireland to get back into the game, they had to turn to some individual interventions. Former Leinster second-row Des Dillon was one to take ownership, taking four English men with him as he touched down in the corner. A few moments later, his former Clongowes Wood classmate D’Arcy sublimely gathered a loose ball before sprinting home with the equaliser. 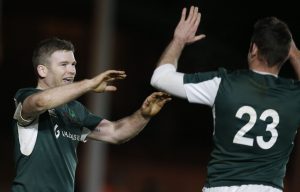 Another terrific instalment in this series raised some much needed funds for several rugby charities, including the IRFU Charitable Trust and Rugby Players Ireland’s Injured Players Fund. Many thanks, as ever, to the dynamic duo of Shane Byrne and Len Dineen who once again brought the spirit of rugby to life.