THERE WOULD HAVE been similar scenes in every club around the country. Every pub, and living room. Every corner of the island. Sent into that dream, Grand Slam-winning, land again. Universal joy, shared pride. 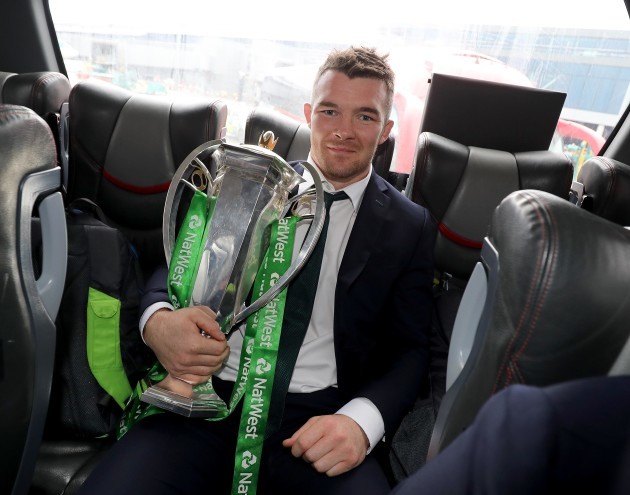 No more so than in Ballintemple, where club stalwarts watched one of their own do what he has always done, and play the same way he has always played. What a feeling. The local lad. Temple Hill, Thomond Park, Twickenham. Peter O’Mahony, Cork born-and-bred, Con through and through.

“All of us start somewhere,” he says.

O’Mahony started before most.

He was just five when pitched into the under eight group on a Saturday morning at Temple Hill, playing three years above himself.

John, Peter’s father — also known as Con John, has held a lifelong association with the club, as does his uncle, and from an early age he would have spent weekends around the place.

“Three or four, I’d say, throwing lineouts in the back garden. I loved it. I used to go to his games.”

Once he was old enough, O’Mahony was no longer on the sideline. Pitched straight into the middle of it, against boys three times his age and size.

“I cried during the first few sessions,” he recalls. “I was probably thrown around a bit for the first few years but that stands to you in a way. Thrown in at the deep end. I wasn’t very impressed with it for the first couple of weeks but you get used to it and I was a bit smaller than most. You have to get up to speed pretty quickly when everyone else is that bit older than you.

“I just remember being daunted by it. At that age there is a big difference physically and I remember the old fella saying ‘get back in there, get on with it’ and that was it. I wasn’t licking my lips tackling the big fellas but you got on with it.”

Rugby is a sport with deeply embedded roots in communities and families across the island, the passion for the game filtering down through generations.

“My earliest memory of the place is hanging around the bar after games and just waiting for the seniors to get off the pitch so you could have your kick around. That’s all you wanted to do, get out there and play with your friends. 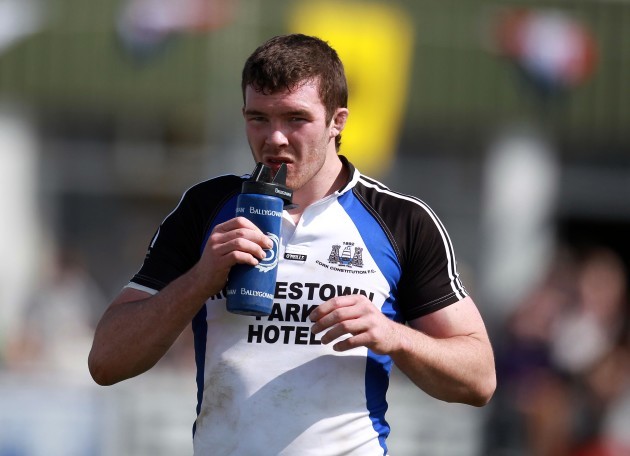 “You don’t consciously think about what it means at the time but you were waiting for school to finish because you knew Saturday was coming and that meant training or playing with Con. It was a big part of growing up.”

Rugby was always going to take over. O’Mahony flirted with GAA in school, but by the time he got to U10 level at Con, training was twice a week.

It wasn’t his life, but quickly became a way of life.

Two years later, O’Mahony was captain of Con’s U12 team. He would go onto captain almost every team he’s played for; Pres Cork’s Senior Cup team, Irish schools, Ireland U18, 19 and 20. Munster and the Lions.

O’Mahony was part of PBC’s Munster Schools Cup winning side, captained by Scott Deasy, in 2007 but the following year experienced defeat to Castletroy at the semi-final stage as captain. The wounds are still raw.

“I was probably one of the few that bucked the trend of not going straight into college from school,” the flanker explains. “I went straight to Con which wasn’t really done, you kind of did your couple of years in college, enjoyed them, and then moved on.

“But I obviously had a big tie with Con with my Dad being up there so much and me having spent a lot of time up there. The coaching staff up there would have been a big pull — Brian Hickey and Brian Walsh.

“I decided to go to Con but it took me a couple of years to find my feet. They were hardened league players and it was a difficult team to get into but I felt it was going to be the best pathway for my development.”

The Ulster Bank League is a tough breeding ground for any player.

He continues: “It is difficult, there are some guys at the end of their career, very experienced players. It was very physical, the guys weren’t maybe as fit but they were onto you straight away.”

But O’Mahony thrived. He relished the physicality, the roll-your-sleeves-up attitude and learned his trade on the pitches of Temple Hill, Dooradoyle, Castle Avenue, Dubarry Park and Templeville Road. It was a cut-throat learning environment, but one which shaped the type of player he would become. 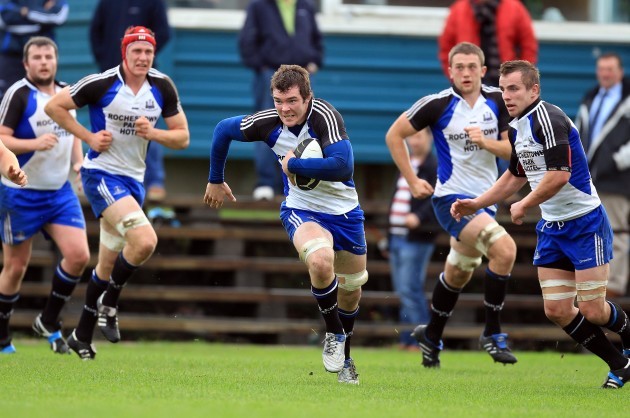 With a mix of youth and experience in the dressing room, O’Mahony was among a group who pushed for professionalism, drove standards and demanded better. He may only have been 20, but he had Con blood in his veins.

“There were a good few guys really pushing for professional careers,” the Cork native explains. “We put in a lot of work and standards were always being pushed. They were very, very high for a club team. But it was hugely enjoyable and we had good success.”

The 2009/10 season was when that team, with O’Mahony to the fore, really peaked. Scott Deasy, Duncan Williams, Simon Zebo, Stephen Archer, Ian Nagle, Billy Holland to name just a few.

“It was a big year for us. It started a successful few years for the club.”

Con would reach unprecedented, rarefied heights that season as they lifted the All-Ireland Cup as well as the Ulster Bank League to complete a memorable double.

O’Mahony was man of the match in the cup final, a narrow 15-11 victory over Garryowen in January 2010. His influence on the team was beginning to grow.

“Ian Nagle got sent off just before half-time for punching Conor Murray in a ruck. He didn’t punch him half hard enough, to be fair to him. He should have hit him properly.

“He got sent off just before half-time and we were down to 14 for the second half. That kind of made it a little bit more special, obviously it was backs to the wall. We were up by a point at half-time and it was a very good Garryowen side, they were in a similar position to us as they had a few guys pushing for Munster.”

Later that season, O’Mahony and his team-mates delivered a fourth Ulster Bank League title to Temple Hill, with victory over a St Mary’s side which had a certain Jack McGrath in its ranks.

“A lot of hard work went into it but it was an enjoyable part of my career. It meant everything, and still does. Your local club, a lot of history so you’re battling with previous teams that have gone ahead and expectations of supporters and the guys around the club. 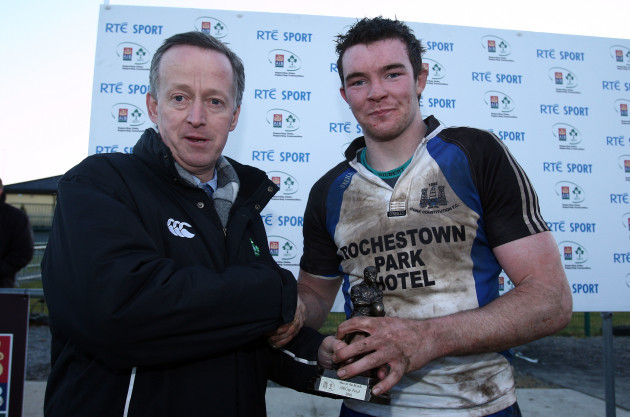 “It’s good to reward all the hard work they put in as well. A lot of hard work goes into a club like Con or any of the Ulster Bank League clubs. It’s nice to have something to show for it at the end of the year.

“Looking back now, I made the right decision to play with Con. I wouldn’t change anything. I put a lot of it down to the Ulster Bank League and it would be great to see academy players and even some senior players who need game time involved with their club because of the quality of the league now.

“It’s important for guys to be match fit and you certainly get that playing in the league. It has been an important part of my career.”

Since O’Mahony helped Con to the All-Ireland Cup back in 2010, the club have gone on to dominate the competition — now known as the Bateman Cup — with victory in each of the last five years, making them the most successful side in its history with seven titles.

With the likes of Ronan O’Gara, Donncha O’Callaghan, Zebo and O’Mahony among its former players, Con has a long tradition of nurturing and developing players who go on to play for Munster and Ireland. Those names are just four among a list of greats.

“The club is so important for the community,” O’Mahony adds. “The amount of kids who train or play up in Con on a Wednesday or Saturday is well over 1,000 at this stage. Success drives success and younger generations want to get involved. When they see success, they want to be part of it.

“I don’t get back as often as I’d like because of my own training and playing schedule but it’s something in the future I want to do. To give something back, maybe a bit of coaching.

“Because Con, and Ulster Bank League clubs, mean a lot to players. A huge amount of credit has to go to the clubs and while they’re proud of the players they produce, we’re always proud of our own clubs and where we started.

“In the Munster dressing room, there would be a lot of slagging going on when we get the results in on a Saturday. When the big Ulster Bank League derbies are on, there would be good craic and rivalry going on between the Con and Dolphin lads and then you have the Limerick clubs as well.

“It was a huge part of my childhood and teenage years.

“All of us start somewhere.”